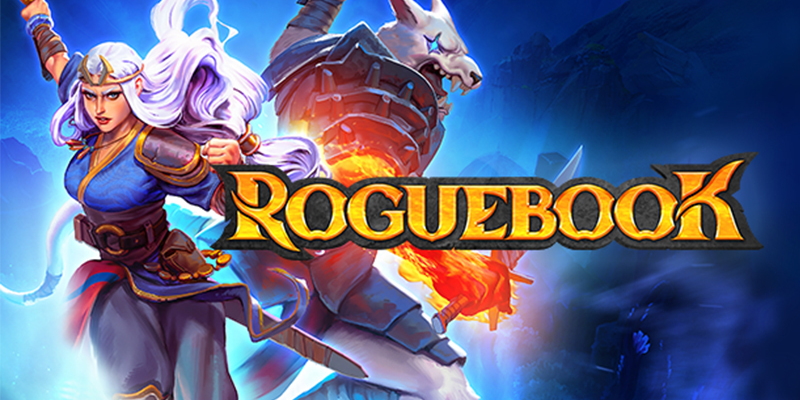 RogueBook by Abrakam Entertainment and Nacon is described as a Roguelike Deckbuilder. If you’re anything like me those two game types don’t make a lot of sense together. It’s like putting chunks of ham in your Lucky Charms. They’re two great things that don’t mix. But you might be surprised because RogueBook makes it work.

The Cards Are Your Attacks

You start the game with two heroes and a set of basic cards. You get into combat with enemies and perform attacks by playing cards. So, imagine a game of Magic The Gathering or Hearthstone. You have a resource that limits how many cards you can play, you draw five cards randomly from your deck, you have a discard pile and a draw pile. However, instead of playing against another opponent who also has cards in their hand you’re playing against enemies on the field. And the cards you choose to play cause your characters to do attacks, or switch position, or to block. In RogueBook you are fighting enemies by playing cards.

The story of RogueBook is that you’re trapped in a book. So the map is presented as a blank page. You start with a path to the boss already filled in, but most of the page is blank. You don’t fill it in by stepping into the unexplored section like you might expect. In RogueBook you have to earn Ink or Brushes, and then use them to reveal map sections. Once revealed these tiles may contain gold, health potions, shops where you buy cards, or combats. This is one of the key ways you make yourself stronger. You find places on the map where you can buy better cards. Which then go into your deck, that’s the deckbuilding part of the game. So it’s a loop of explore, fight, explore, then fight again. Until you run out of ink and can’t explore anymore. Then you go fight the boss. Which is hard.

So far the boss has defeated me every time. But that’s what roguelike games are all about. You play a run and die, and then try again. But it’s not as bad as starting completely over. If you found some Pages during your run you can use them to unlock permanent upgrades that make future runs easier. You can also unlock different characters. Or so I’ve heard. I guess you have to defeat that stinking first boss before you get a new character. Those new characters will have different cards and powers. You also learn which cards you liked or didn’t like from the last run, so you can choose better cards during your next. So you’ll do better next time, probably.

RogueBook is a lot of fun. The runs don’t take very long. Just do a quick one if you’re short on time or do multiple runs back to back. The cards are interesting and it’s fun to find new ones. Things are randomized enough to make each run different. The combat is complex enough to be interesting without being overly complicated like some card games can be. All in all I’ve really enjoyed it.