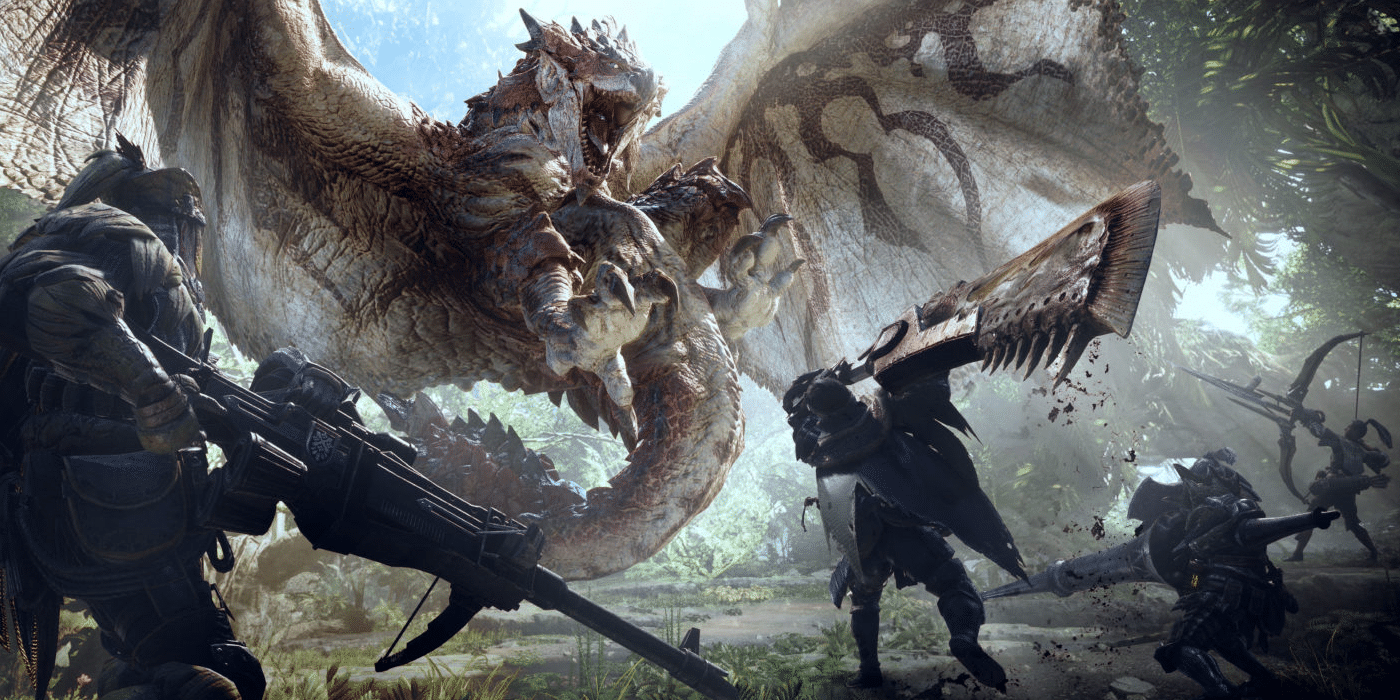 Monster Hunter, on the whole, is tough.

Tougher than the steak that your one friend cooks well-done because they have an under-developed sense of both taste and, apparently, self-respect. Yes, you, David.

As Void pointed out on our network’s core podcast, the core of that difficulty isn’t in the monster’s attack power or learning the right “dance” of reactions to each monster’s every move. Though, granted, there is quite a bit of that.

The Monster Hunter series plays hard-to-get by just being so darned obtuse at times.

The original game on the Playstation 2 had virtually no tutorial. It dumped you almost straight into the field and assumed you would just “get it” by running enough arbitrary errands to collect eggs.

Monster Hunter Rise buries you under enough instructive text that BradyGames could bind it and sell it for a profit.

It’s been a sliding scale in the two decades between here and there, but suffice it to say, the series never exactly cracked the code on “breaking in” new players.

So it helps to have someone to show you the ropes.

When you follow a series for long enough, it starts to take different forms for you. That doesn’t even necessarily mean that the series itself has changed, mind you. It’s just a fact of life that – if you’ve been having enough different experiences – you’re probably a very different person than you five years ago, or even fourteen months ago if those months have been particularly eventful.

And so do the people around you.

By my reckoning, I’ve been playing Monster Hunter for about a decade now. And not to carbon-date myself or anything, but that puts squarely in my college years.

Which I’d argue is the perfect storm of conditions to forge a new Monster Hunter player in.

Depending on how soon exams are coming up, you have a lot of free time as a student. And more than likely, you have a built-in group of peers constantly bugging you to spend that time goofing off.

And the best way to get your footing in a systems-heavy game like Monster Hunter is, well, to spend a lot of collaborative goofing-of time in it.

I’d thrown myself at the original PS2 game a couple of times, and at the Wii release of Tri for a hot minute. Both times were ineffective, not only because I insisted on using the Lance (which felt slow and chunky and I hated it) and because I was trying to fly solo (which was a tedious, unguided slog through early-game fetch quests).

Experimenting with weapons in a demo killed the first problem. Playing in the same room with other flesh-and-blood humans took care of the second.

And yes, that’s true of anything. We can suffer through the Hollywood Monster Hunter movie if we’re muscling through it together.

But I have a very specific sense memory of plopping down on the couch after class with a handheld, where more experienced friends would patiently explain when is and isn’t the proper time to snare the Lagiacrus in a net. It was a more genuine team-building exercise than anything a mandatory retreat or seminar has ever tried to put me through, because it was hundreds of cumulative hours of consistent effort, day after day, being patient with each other.

That kind of persistence really sticks in your craw.

And I loved those sessions. My hunter character is still always named “Shakira” of all things because of a quick one-off gag we shared way back in the beginning. I’ve just stubbornly refused to let go of the joke all these years.

But the goal of college – to some degree – is that you graduate and move on.

And, as the saying goes, splitting the party is a surefire way for things to go south.

Well, I went north, took up an “adult job” with “responsibilities”, and all of a sudden I was left high and dry when Monster Hunter 4 finally came westward. Nobody I knew in town played – not in earnest, at least – and the back half of that game just isn’t built for a lone player. And at the time, Discord was… extant? Definitely not in a state to host regular four-man parties, at least.

Have you ever tried to have regular gaming sessions over Skype, by the way? Even beside having to more-or-less make video games a scheduled event, it’s just not what that software is equipped for.

So on those occasions where we could physically visit each other, we went in hard.

…and 4 might have been my favorite experience for that reason. I’d go off to “practice” on my own, then bring that experience back to the guy who first brought me on board. Being able to flaunt my Hunting Horn prowess like that felt properly rewarding.

But any long-distance relationship is draining to keep up, and there’s only so much a party can hold together in fits and starts.

By the time Generations came around, we were across separate time zones. One of our anchors had sprained his hand, putting him entirely on the bench.

And that was the end of that.

Don’t get me wrong, World brought a ton of new players into the fold. I’ll never begrudge it of that.

But it was very stop-and-go for me.

Of everybody I could finally convince to play, none were so consistent. I could hardly track who was on, playing when, and on what system. And most of all, who was still playing after the first month.

There were plenty of people to hunt alongside. But previous few were invested in hunting in the same way that the earlier games required, for better or for worse.

And so, after I reached the highest level of quests in World, I kind of just… petered out. Even with a new monster rearing its horned head every other month, it was hard to come back when I wasn’t sure who would be waiting and ready.

Then Iceborne came in full force, and we started talking about how everyone seemed to have hit the same snag. We caught the initial bug, but were now all out of practice.

A shameful lot, as much as you should feel shame about a game.

(Which you shouldn’t at all, by the by.)

So we set a stake in the ground. Once a week, at the same time. The same group of four players, more or less one substitute. And we took down every monster in the park that so much sneezed at us. We even shook up our own foundation, jury-rigging a “healer” role that the game wasn’t exactly built for. For a short time, that game was our playground.

Except we never fully managed that last part.

The last few monsters in World aren’t built the same as the rest.

They were, admittedly, added well after the game’s launch. Eleventh-hour nasties meant to test those experts who were in for the long haul.

But they also worked against what those experts had already learned. Some tested the game’s structure by having multiple hunting parties contribute against a single boss for shared rewards. Others added “instant death” mechanics that required very specific approaches, or else.

In short, they were borrowing concepts from MMORPGs.

And with respect to those who do, I’m not the kind of masochist who plays content labeled “Extreme” in Final Fantasy XIV for fun.

And the rest of the party wasn’t having fun, either.

We conquered monsters who joined the landscape after these game-bending oddballs, sure. Raging saurians dwelling deep in volcanoes, who trapped us in a single room but with naught but our wits and the items on our belt. But those, at least, were of a breed we had come to know and challenge together.

Asking us to abandon the cadence we’d already built up in favor of something new was tantamount to asking us to play another game entirely.

We weren’t going to break that wall – not without tearing our own hair out. There were still monsters out there, sure. But we’d reached the end of our stay there.

And sometimes it takes a full group reaching the same conclusion to feel like that’s okay.

After all, we already knew there would be another time, another place for us to regroup as intended.

…so why am I telling you all this?

Because Monster Hunter is only half as fun when you keep it to yourself.

Sure, you can absolutely play it on your own. But in many ways, the games actively work against solo play. Having a wyvern constantly on your tail is exhausting, but sharing that heat with just one other person makes things three times more manageable. Even purely by the numbers, monsters fought late in the journey scale famously poorly to the lone wolf. The game quite literally stacks the odds in your favor as a four-player party.

But there’s only so much coordination you can do with a German player when you can only communicate over glorified emoji. You’re silently sharing an experience, but you might as well be playing in parallel rather than as a team.

And there’s a reason nobody extolls the virtues of parallelwork.

Clearing a hurdle functionally on your own is a relief. When you and three friends jump it at the same time, that’s about the purest “high-five, cut-to-credits” moment you can get.

And when all of you fail together, hey – you all put in the time and effort to take a swing at something. That’s the definition of bonding.

I’ve already shared that with so many other people in Rise. The fire-forged group we broke through Iceborne with, the select few from its early days that still hold interest, and even a few friends who haven’t played since the old days. People on the Geek to Geek Discord who are sharing in the excited excitement. And some across other communities, dragging new people in gently convincing friends to join the fun.

So find yourself a party. Hunt together. Struggle together. Then celebrate together.

Victory is meant to be shared.