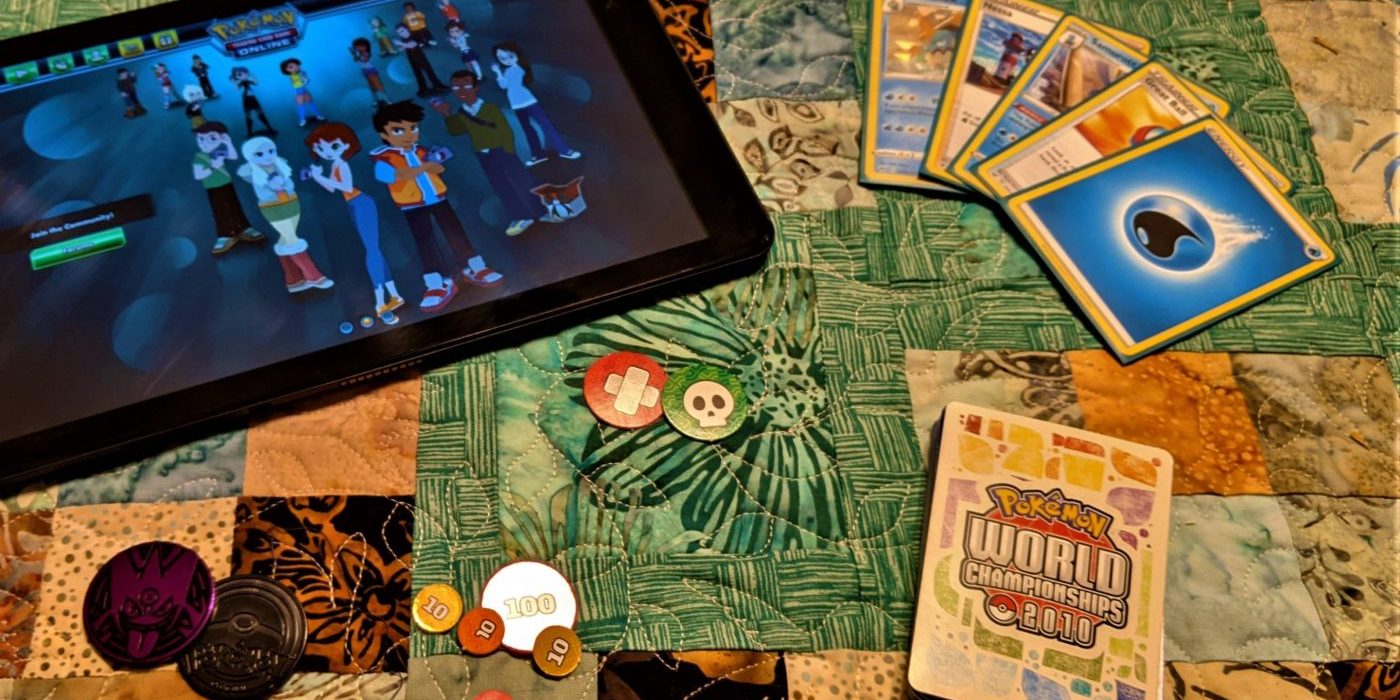 [Keywords] The Pokémon TCG and Approachability

I figured things were heading this way after I finally caved on both fighting games and MMO-style games within twelve months of each other. I tend to want to cover as much geeky ground as possible; call it fear-of-missing-out or whatever you like. But very few corners of “gaming geekery” are still in my blind spot any more, and trading cards were easily the biggest untrod region of that.

Not that people haven’t tried to hook me in the past. Friends all around me are excited about Magic: The Gathering, but that excitement is a double-edged sword. Approaching anything with that many moving pieces and decades of history is intimidating. Being thrown into that environment against experienced players – even if they are your friends – is how you drown someone.

Better to start off in the kiddie pool.

I’m not going to pretend for even a second that I would give any other card game half the chance I would Pokémon. It’s no secret that I’m an enormous fan of the series–at–large; frankly, it’s a little weird that it took me over two decades to give the cards a real shot given how brain-bustingly popular they are. You’d think that our elementary school banning them on school grounds would have at least piqued my interest enough to drop some allowance money.

But if not then, they were bound to get me eventually. I’ve accrued a stack almost as a side-effect of simply existing as a geek in the world. And, y’know, because I enjoy just having the things. Not even necessarily to play with, but just to have as bookmarks and cubicle decor and as nice objects to look at. The core appeal of the series just shines through so strongly in everything they do – especially visual art – that you can’t ignore them.

These three Pokémon aren’t anywhere near my favorites on their own, but they may just comprise my favorite set of three cards in the game.

The art in the Pokémon TCG is chock-full of this stuff, like artist Asako Ito who crochets charming little Pokémon dolls. It’s a specific kind of loving creativity that I haven’t seen in other collectible card games.

And for pure “wow factor”, look no further than the “V” and “VMax” cards from the most recent set (at time of writing). Every time I come across one of these, I want to build a deck specifically so I can show it off, even if it’s not technically useful.

Not that I even have to build decks to get on-board.

I’ve talked about this same feeling before with Gundam kits, and all of that still holds true. Aside from actually learning the rules – something that ten minutes with a pamphlet can fix – one of the most intimidating factors in any collectible card game is possibility space.

The opponent could come swinging with one of a thousand options, and you need to be able to respond to any of them. That level of preparation is just paralyzing for a new player, and makes the first step – building a deck – like a trial-and-error exercise you’re taking half-blind.

And the Pokémon TCG doesn’t make you do that at all.

Pre-constructed decks are hardly a revolutionary concept, but in most other TCGs, they feel like building-blocks to start the “real game” from. In Pokémon, they’re their own format, and one that the creators push pretty hard. They’re even the default option when playing online.

And… they’re really fun. They’re called “theme decks”, and not for no reason. Just like any player worth his salt would do, the modern theme decks are all built around specific strategies. Namely: “cycle through your deck to build up one of a few specific combos, then hammer them to victory”. Again: not new. It’s delightfully straightforward, and not even that far off how high-level play works. They’ve just pared the whole game down to its a core representation, so you can see “real play” inside your first few rounds.

Getting to that core quickly is the how you hook players, after all.

Of course, a poorly-tuned game can just lose me entirely after that initial “honeymoon” phase. The entire concept of a “current set” and cards going out of rotation can feel like all the worst parts of a roguelike. Build yourself up, then a year or two down the line, whoops, you have to build a whole new deck to stay playing (at least in what they call “standard” play).

Not to oversell it, but for how much air-time people give to valuable, rare variants of cards or out-of-print classics, actually getting the components of a deck together isn’t that much of an investment. Some of the more useful non-monster cards in the Pokémon TCG are dead common. The Pokémon aren’t exactly costly to get your hands on, either – many of the powerful cards seen in current competitive play, in holographic print, will run you…

And even when I mention “competitive”, that’s only even how a narrow subset of people play. For the most part, Pokémon as a series has always kept its barriers knee-high, and the TCG gets there in much of the same way Super Smash Bros. does: a modest serving of randomness.

Coin flips. Lots of drawing more cards and hoping for the best. Rock-paper-scissors. For every way in which your opponent could come at you with stronger options, they could get just as unlucky and whiff three moves in a row depending on the card they’re playing.

Yes, it’s painful when it happens to you. And yes, just like Smash, there are dozens of ways to minimize random chance for people who want to play with more consistency. But, at the level where most people will probably engage with the Pokémon TCG, it’s incredibly easy-come-easy go. So even when I’m doing poorly, it’s hard to get too riled up.

One bad round is hardly reason to think you’re just a poor player, after all. It’s just made thuddingly obvious here.

The problem with getting into the Pokémon TCG right this second, though, is twofold:

Going full-digital minimizes both problems, and a ton of problems that would keep an apprehensive player like me.

No shortage of supply, no limit on who you can or can’t play with. Perfectly pandemic-proof.

Easy access to a ton of those juicy theme decks. Give me a dozen options, but not infinite options if I don’t want them.

Even a five-step tutorial. Not just telling me rules, but letting me actively participate in them as I learn hands-on. Then trickle-feeding the last few, powerful cards in the starting deck so I can learn to plan around each individually.

Down to effortlessly shuffling cards and automating the rules, it just does so much right, and it’s what finally, really broke me into a game I’d been putting off for two decades. I may have dabbled before, but now? I’ve been dueling other humans daily since I re-installed the app two seeks ago. I’m probably up past four dozen matches by the time you read this.

So maybe that’s just what I needed all along. Someone to file all the rough edges off what feels like a colossal, long-lived machine.

But hey, that’s not such a bad thing, I reckon. Better to be have your hand held through something than to write it off entirely.

I’ll take overly-friendly over prickly and obtuse ten times out of ten.