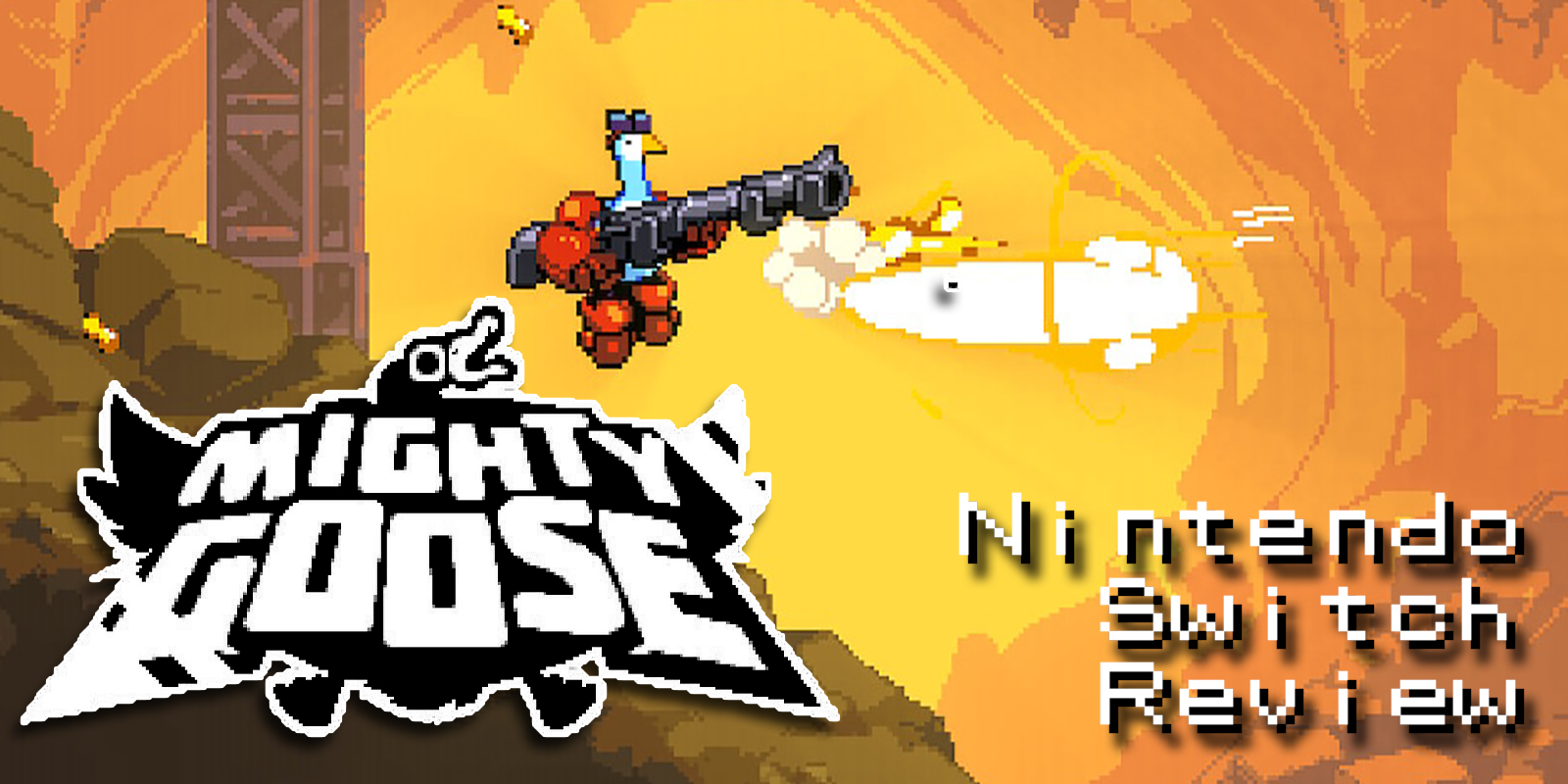 There are few joys simpler than a good run-and-gun shooter. I can’t tell you how many times I’ve played through the first few levels of Contra. It still delights me every single time I start it up and mow down waves of enemies. I’ve played most of the Contra games, but the Metal Slug franchise was always “the other series” to me. I enjoyed checking it out at friends’ houses or in the weird, dark arcade room at my orthodontist’s office. I’ve tried Metal Slug recently, but without the nostalgia to pull me through I found it tough to get past some of their more old-fashioned design. Enter Mighty Goose. This new game brings all of the fun of the Metal Slug franchise forward with great gameplay, a ridiculous story, and a wonderful presentation.

The basic gameplay in Mighty Goose has you running through side-scrolling levels with some very basic platforming. Throughout the levels, you’ll blast away hordes of enemies who approach from every direction. You can tap to fire rapidly, which is good since most enemies take a few hits to knock out. I turned on the accessibility option to be able to hold the button to rapid-fire and found that way nicer. Basically, this is a game where you shoot everything that you can while avoiding getting shot yourself, then move on to find more things to shoot.

Throughout the game, you’ll come across a small but satisfying collection of guns. You’ve got a default arm blaster, plus four others. The shotgun in particular is ridiculously fun to wield. Each one you pickup comes with a set amount of ammunition, which led me to switching firearms regularly. In this game, there’s also a built-in shop where you can redeem coins you gather from enemies for a new gun or fresh ammo at any point. This can really help when you find yourself going up against a boss with just the default blaster.

There’s one more core gameplay principle to keep an eye on in Mighty Goose. A bar on the left side of your screen fills up as you damage enemies and take damage yourself. Once it’s full, hitting both triggers will cause your goose’s head to burst into flames for a few seconds. In this state you are invulnerable, fire faster, and are just generally more awesome than you were before.

There’s also a machine-gun equipped, one-wheeled motorcycle that pops up from time to time. You can wheel it around the stage a bit faster than the goose on their own. The machine gun is great for taking on big groups of enemies, plus it just looks cool. You can even use the shop to drop this beast into places it’s not meant to be.

At some points, your goose can even fly! Well, they fly a jet that is. It’d be silly if they just flew on their own. There are also set pieces where you pilot a full-on tank and a mech suit.

Yes, your mech suited goose can hop inside a bigger mech suit, like Iron Man in the Hulkbuster Armor.

Each of these vehicle sections feels really good to play. The basic controls stay the same from goose to gizmo, so it’s easy to transition for a nice change of pace.

What Motivates a Goose?

The opening slides of Mighty Goose explain that the titular goose, who is equipped with robotic legs and arms, is the greatest bounty hunter in the galaxy. Each level is framed as a mission, with you dropping into an area with a pretty straightforward plot. You might be out to rescue a prisoner or stop a drunk from causing a ruckus. These little story beats are a cute framing device, but paying attention to them never motivated me more than the simple hook of “shoot everything and laugh maniacally at the explosions” did.

On the plus side, several of the characters that you are after on the missions end up becoming companions that you can take with you on future levels. The very first companion is a duck. It’s not, like, a cool cybernetically enhanced duck or anything. It’s literally just called “regular duck”. And you can have the duck follow you around for the rest of the game if you’d like.

He lays eggs at your enemies. It’s fantastic.

There’s also some sort of overarching plot happening in the background of this game. Some shadowy overlord sends a raven out to stop you from interfering with his operations. This is slightly more interesting than the level-to-level stories. Every time the raven showed up, there was a sense of “oh dang, it’s on now!” Otherwise, this just felt like a loose connection between the levels, rather than some sort of thrilling, intriguing narrative.

In a game like this, it never really bothers me if the story is a little dry. Mighty Goose isn’t here to make you wonder at what it all means, like Aerial_Knight’s Never Yield. It doesn’t want to make you consider the depressing power of corpo-capitalism, like Sludge Life. Nah, Mighty Goose just wants you to have a fun time blowing stuff up.

And it lets you blow stuff up real good.

Beyond the gameplay feeling great, everything in Mighty Goose also looks and sounds wonderful. The sprite work is absolutely some of the best I’ve seen. In the first level I literally stopped for a few seconds to just appreciate how good the goose looked when he jumped.

There are constantly bullet casings and body parts and explosions flying across the screen. Enemies move smooth and look great. Enemy attacks are readable and usually dodgeable, if you’re paying attention. Even the music is spectacular, with a bit of a jazzy tone underscoring all the chaos.

Just the Right Amount of Retro

Mighty Goose does a fantastic job of feeling like a classic retro game, but it’s not. Some of the absolute best parts of the game are where it breaks away from the retro model.

For instance, when your goose gets shot, there’s a great slow down zoom effect that gives you moment to catch your breath. Also, sometimes the game does that slow down zoom with a big sprite of a honking goose. Just… as your shooting things. I don’t know why that happens, but it rules.

Then there’s the fact that this game actually wants you to beat it. The games that inspired this one all came from an arcade heritage. In those days, artificially inflating the playtime of a game by making it obscenely difficult was an industry standard. Between the shop and companion systems and the fact that it takes more than on hit to die, Mighty Goose is designed to let the player win.

Heck, if you die a few times in a row the game will just straight up give you a free weapon when your spawn!

For those who thrive on old-school difficulty, Mighty Goose has a second, tougher playthrough. This still hasn’t felt as difficult as shooters I grew up with, but it’s a nice inclusion.

I really, really dig Mighty Goose. It’s not a terribly long game, and it’s not a game that’s going to make you think, but it’s a ton of fun. Playing it is a blast. Unlocking new abilities to tweak the gameplay keeps things fresh. This game manages to thread that needle of feeling like how I remember classic games playing, while actually being way, way nicer to pick up.

After spending some time with Metal Goose I actually popped on one of the Metal Slug games that’s out on the Switch. I played for about three minutes before I shut it down and went back to being the goose.

There are a few things that this game could have included, but the package feels complete as is. It’d be nice to have more weapons. The campaign could be a few levels longer. A two-player mode would be really nice. The important thing, though, is that it doesn’t feel like it needs any of those things. Mighty Goose is great just the way that it is.