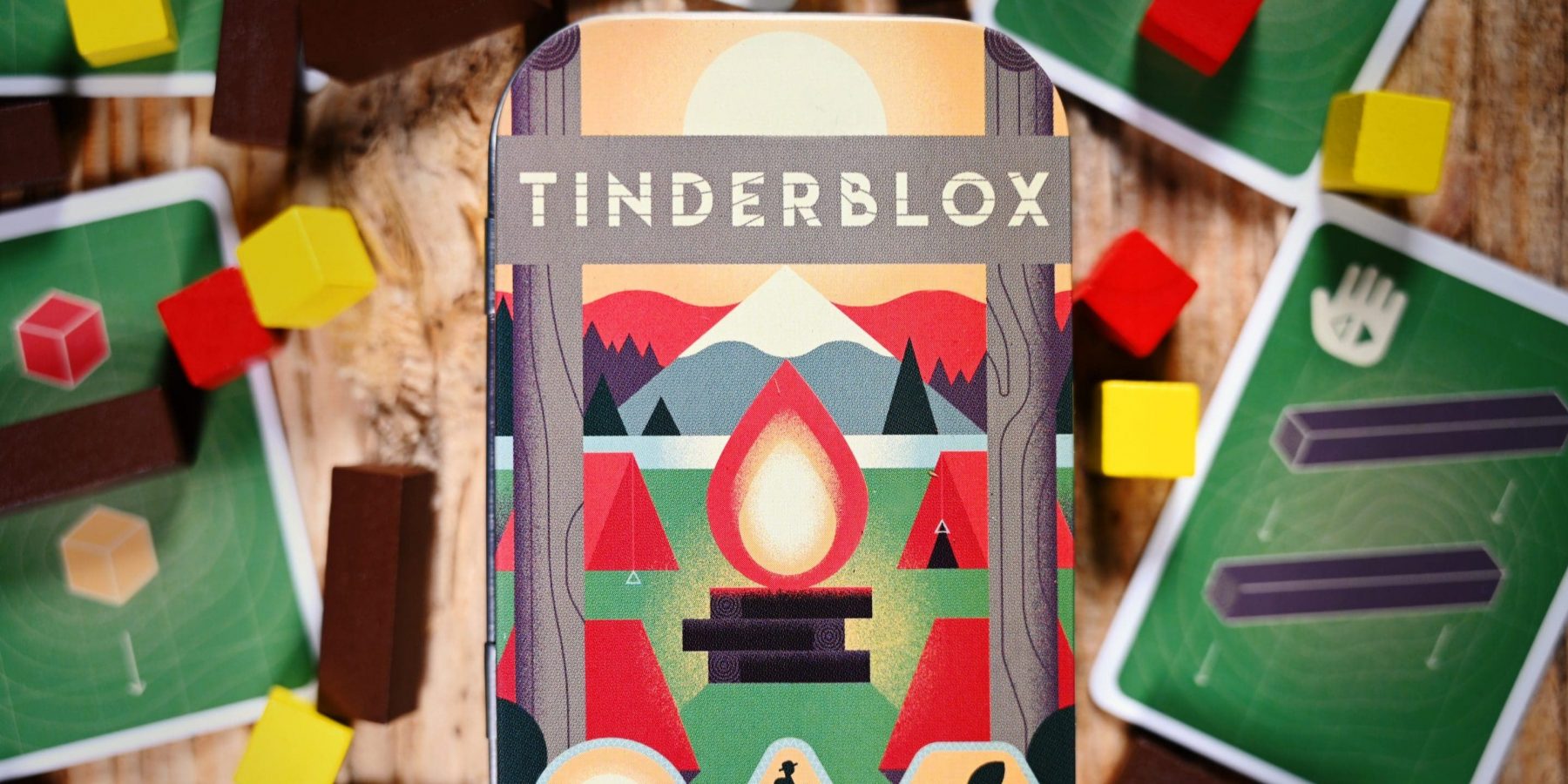 Tinderblox caught my eye as “a tabletop game that fits in your pocket”. Building off classic bar games with a modern sensibility, this is one that’s easy to keep on-hand.

One of my favorite sub-sub-genres of tabletop games I’ve heard described is “board games that I can fit in my purse”. And while I don’t carry a purse, exactly, my favorite coat has more pockets than you can shake a stick at.

So, naturally, I’m going to fill one of them with a game about camping.

Tinderblox is, to tear it down to the absolute basics, Jenga played in reverse. Starting with one of two starting arrangements, each player will take a turn to flip over a card. They then follow the pictograms on them like an unstable LEGO set, building a tiny structure before adding it to the main structure. There are two wrinkles:

…and that’s it! As you might expect, you lose the game if you accidentally topple the fire over. Then you can either start over right there, or keep going until all-but-one player has been eliminated. Low stakes, high fun!

With a more physical game like Tinderblox, the appeal kind of explains itself as you watch other people play. And that’s one of the game’s greater strengths: drop-in-drop-out play. So long as nobody’s too picky about adding people mid-round, new players can draw a card and take a shot at it, and existing players can bow out if they get caught in another conversation.

It’s the epitome of a casual game, and I only mean that as a complement.

In fact, while the box lists 2-6 players, the real upper limit to the number of players seems to be more about how many are interested and can physically reach the pile. And there’s not really a lower limit, either – before packing it for a night out, I first played the game by myself, drawing cards and stacking the campfire as high as I could before it inevitably spilled everywhere. And that was a lot of fun in its own right!

In short, it’s the kind of tabletop game that’s endlessly flexible, which makes a perfectly snackable little game. And who doesn’t want to nosh on a little gaming appetizer while you’re waiting around at a restaurant?

The one “gotcha” that strikes me about Tinderblox is that, unfortunately, it’s one of the less physically-accessible board games I’ve played. Since the core of the game is “stacking tiny objects with tiny tweezers”, it requires a keen sense of balance and fine motor skills to execute on. And that’s great fun for plenty of folks! But for many others, it’s a barrier to entry.

It’s easy not to think of board games as a physical challenge, but dexterity is as much a hurdle as strength. And for those of us who have a harder time – due to injury, or carpal tunnel, or just because we have big hands – Tinderblox can feel a bit exclusionary.

It bears mentioning that I’ve also noticed the edges of my cards already fray after bringing it out for three sessions. But that isn’t a knock against the build quality, exactly – I’m a fan of the hard tin Tinderblox travels in. It reflects more on the kind of situations that you’d pull it out – at a local brewery, or a well-traveled food court table, or an actual campsite – and how that will inevitably wear your set down pretty quick. But hey – it’s a game about building a campfire. A bit of weathering won’t hurt its charm any.

While Tinderblox‘s finicky play might not be for everyone, it’ll be a lovely little pocket-sized challenge for many. And with how little space it takes up and how easy it is to get into, it’s hard not to at least give this game a try.