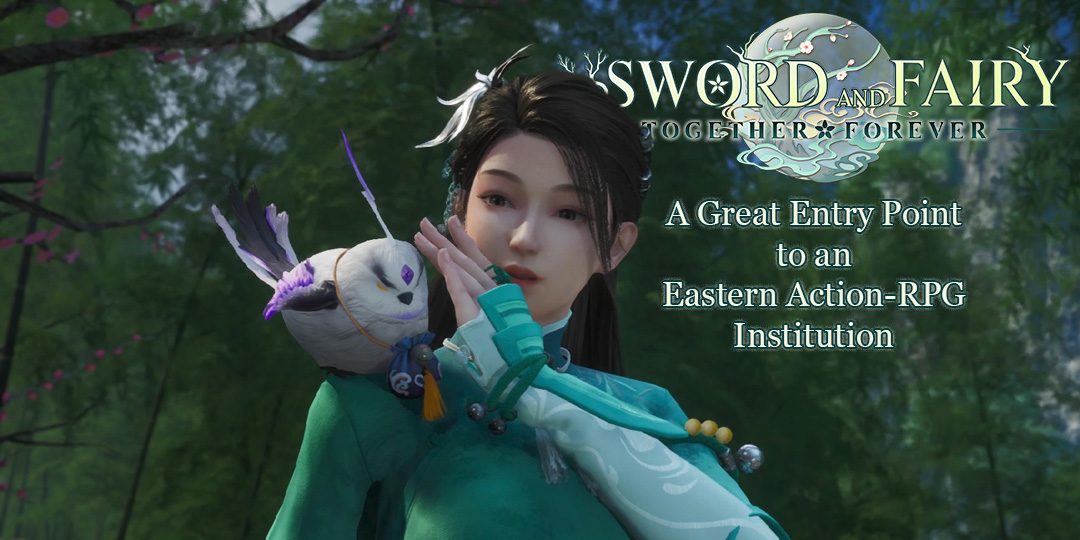 Sword and Fairy: Together Forever: A Great Entry Point to an Eastern Action-RPG Institution

by Troytlepower | The Geekery, Video Games

Sword and Fairy: Together Forever is an excellent entry point into a 30-year-old franchise, with great action, beautiful visuals, wonderful worldbuilding, and teeny-tiny text.

Title: Sword and Fairy: Together Forever
Release Date: August 4, 2022
Price: $39.99
Suggested Audience Age: Rated T for Teen by the ESRB
Time to Play: 24 hours, according to How Long to Beat
Availability: PlayStation 4 & 5
Recommended for fans of: Eastern Myth, Action RPGs, and Female Protagonists
Geek to Geek Media was provided with a review copy of this title.

It didn’t take much more than a flashy, bright art style and a female protagonist to pique my interest in Sword and Fairy: Together Forever (AKA Chinese Paladin: Sword and Fairy 7). Every screenshot looks like a still from a great CGI movie. Finding out that it was steeped in Chinese mythology had me even more intrigued, but I started up the game with no idea that this was actually the seventh mainline entry in one of China’s most renowned RPG franchises, spanning back to a DOS game that released almost 30 years ago!

After a few hours, I feel like I’ve barely scratched the surface of this game, but so far I’m really loving it. Sword and Fairy is a gorgeous action game with flashy, fluid combat, a few minor hiccups, and layers that I haven’t even begun to uncover.

Since the female protagonist wielding a long katana and a pastel dress was one of the hooks that pulled me into Sword and Fairy: Together Forever, I was really surprised when the game started me up as a dude in white robes. I didn’t have long to question it, though, because an army of demons started chasing me.

This game throws into the action immediately the same way Aztech: The Forgotten Gods did. You start off as another character who is already deeply entrenched in the mythological power struggle that the main character journey’s into over the course of the story. Getting to start the game with a character that already feels overpowered works really well as a hook and a tutorial. You learn all about running, jumping, and dodging by avoiding demonic arrows. Then you get into some close-quarters combat to learn how to chain and combo your light and heavy attacks, and how to use quick actions to deploy powerful magical abilities, all in real-time.

The Village of Vibes

Unlock Aztech, when you meet the main character in Sword and Fairy, she’s already fully equipped to kick ass. Yue Qingshu is the primary member of one of two orders who protect a small village from the dangerous creatures at their borders. Her specialty is battling dangerous beasts with the help of a spirit companion that can transform between a giant, rideable, monstrous bird of prey and an adorable puffball who follows you around.

At this point in the game, you’ve got a lot more opportunities available to you. The village and the surrounding forests and hillsides are a small, open-environment that you can explore at your leisure. Yue Qingshu guides you through the story by talking out loud to herself constantly, and a big golden marker on a minimap ensures you always know where to go to advance the story.

However, you can also talk to villagers to unlock a bunch of side quests. I completely lost the thread of the plot as soon as I got to the village. Instead of making real progress, I did every random errand I could find. First I helped a woman find her stolen malt sugar, then I bartered with a merchant to buy a pinwheel for a child. I caused a domestic dispute between a woman and her good-for-nothing husband and rescued a drunk who was sure that wine gave him superpowers.

The side quests all had just enough charm to make them enticing, but mostly I just loved wandering through the world and grooving to the beautiful score. I got into a handful of fights with monsters in this section, but I spent way more time wandering than engaged in action.

Unfortunately, I have run into a few issues that pulled me out of my journey through Sword and Fairy: Together Forever. None of them have been huge, but they’ve all been cumbersome in one way or another.

As a brief example, during one of the opening cutscenes, the audio got a bit out of sync. Very noticeable, very annoying, but then when the scene transitioned it was all fixed.

The biggest issue has been that the text size in this game seems absurdly small. I don’t have the biggest TV in the world and my couch is just a little further away from it than I like, but both the menu text and the text on your HUD telling you your current quests are problematically tiny in this game. It’s so small that it actually got me to look up the zoom function on the PS5, but even with that, it was sometimes tough to read because there wasn’t enough contrast between the letters and the background.

Thankfully, you can adjust the size of the subtitles. Since all of the voice acting in the game is in Chinese, it’d be basically unplayable if you couldn’t make that font easy to read. Instead, the only problem I had with the subtitling is that sometimes the translation can be a little bit wonky. It’s not Google Translate levels of bad, but about every tenth line has something worded in a way that’s just weird enough to make me do a doubletake.

Finally, one of 3D gaming’s oldest annoyances is back in a big way here: invisible walls. Sword and Fairy is generous with the amount of its landscape that you can wander through. I jumped up and down cliffs, through rivers, and generally had a great time making Yue hop around like only a video game character piloted by an idiot can. Then, every once in a while, I’d find a hill I wanted to careen down or a pond full of lilies to splash in, and instead, she’d just… stop. Does it ruin the game? No. Did it bum me out every time? Yes.

Once I finished off every sidequest I could, I finally pushed the story forward a bit. I still am not sure what’s going on, but it seems like Sword and Fairy: Together Forever is dropping Yue into a power struggle between demonic and divine forces. Both sides seem to be trying to get their hands on a child who has been raised in isolation by the organization that powers the force field keeping monsters out of the town. I have no idea what any of that is going to develop into, but it feels extremely epic and the story is told through dynamic, exciting cut scenes.

On top of that, the menus in the game hint at a bunch of features I’ve yet to unlock. There’s a whole gear system, with the ability to equip different outfits, weapons, and accessories. Plus there’s an ability page, where I think you unlock new magic that you can hotkey in battle.

On top of all those ways to optimize Yue, you can level up your spirit companion by feeding them fruit. And on top of that, it looks like there’s a whole dang party system in the game. I don’t know if this will end up being like Dragon’s Dogma where you can have companions follow you around and assist in battle, but I sure hope so!

I am absolutely smitten with Sword and Fairy: Together Forever. After just a few hours its combat, visual design, and worldbuilding all have me super interested. Even with the few issues I’ve run into, I’ve loved the time I’ve spent with this game and I’m really looking forward to seeing how it opens up when I’ve played a bit more.

But seriously, is it that hard to give me an option to increase the font size?