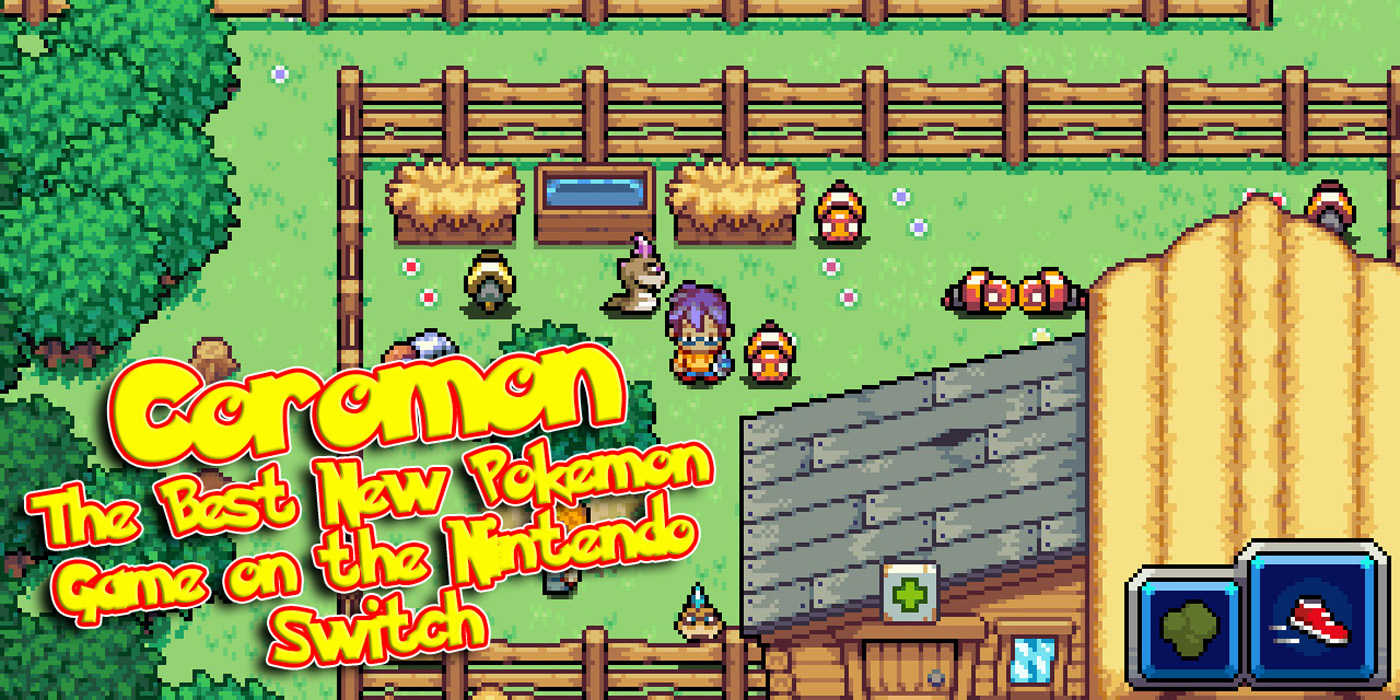 The indie monster-catching RPG Coromon has finally landed on the Switch, and this game couldn’t be more Pokémon if it tried.

Title: Coromon
Release Date: July 21, 2022
Price: $19.99
Suggested Audience Age: Rated Everyone 10+ by the ESRB
Time to Play: 27 hours, according to How Long to Beat
Availability: Switch, Steam, Epic, Android, and coming soon to iOS
Recommended for fans of: Pokémon, sprite-based art, and bad puns
Geek to Geek Media was provided with a review copy of this title.

Pokémon-like games are a dime-a-dozen on the Nintendo Switch and usually come with some sort of twist to help them stand out. In Monster Harvest, the monster-catching formula melds with Stardew Valley, to have you growing crops to use in battle. Monster Sanctuary, on the other hand, brings a Metroidvania-style overworld to the table. Then there’s Monster Hunter Stories, which has you battling side by side with your captured creatures.

Then there’s Coromon, a game that’s finally made its way over to the Switch after a few months of heavy praise on Steam. I’ve spent about ten hours exploring the world, navigating dungeons, and catching monsters. Other than a few quality of life improvements, this game does almost nothing to differentiate itself from GameFreak’s flagship franchise, and that’s just fine with me.

The World of Coromon

Coromon, like every great video game, starts with your character being woken up from a deep sleep. In this case, your mom is waking you up to make sure you aren’t running late for your first day at a new job. As a battle researcher at Lux Solis you’re given a gauntlet that lets you catch, battle, and research the delightful beasts called Coromon who inhabit tall grass, caves, and waterways throughout the Velua region.

A quick personality test helps you pick from one of three different Coromon companions to join you on your journey, and then you set off to build up a team of six.

The story and setup aren’t exactly torn from a Pokémon strategy guide, but it’s close. Instead of treating battling as the primary sport in the world, it’s a job. You don’t go battle gyms for clout. Instead, you are tasked with missions either from Lux Solis directly or from people in the world who need your help. Oh, and of course there’s some cataclysmic conspiracy percolating in the background. It’s a different flavor but still feels absolutely familiar to Pokémon players.

Throughout your adventures in Coromon, you’ll find yourself in battle with wild Coromon, other trainers, and even inanimate objects. Battles play out on a turn-based system, with the Coromon with the highest speed going first. Different types of Coromon can be more or less vulnerable to different kinds of attacks.

When you finish a battle, every Coromon who participated (even ones who have been knocked out) gains experience. Gather enough XP and you level up. Level up enough times and your Coromon might evolve to the next level.

Look it’s… it’s just Pokémon, okay? Your attacks draw from one collective stamina pool instead of each one having individual PP and some status effects work a bit differently, but other than that it’s Pokémon. But that’s fine, because Pokemon is a fun game, and this is a fun version of Pokémon!

Listen, if you don’t like Pokémon games, then Coromon is not going to change your mind. It echoes the Pokémon formula wonderfully but doesn’t do much of anything to change things up, outside of a few quality of life features I really enjoy.

First of all, Coromon has different difficulty levels and has you choose one at the very beginning. I’m playing on Normal, but you can also make the game a bit easier or much harder. There’s an easy mode, which makes healing easier and items cheaper. On Hard, you cannot run from battles, and knocked out Coromon disappear from your party. On Insane, you cannot use recall items to escape dungeons, and you can only catch one Coromon per area.

Yup, this game has a Nuzlocke system baked into it.

Beyond that, you can even set up custom difficulty settings to tweak the experience to your liking. You can tweak whether or not your Coromon regenerate health or stamina on their own, cut down on how many times you can visit each of the game’s PokeCenter stand-ins, or even adjust whether you can or can’t catch wild or trainer Coromon.

Then there’s even a built-in randomizer function that you unlock after playing a bit of the game!

Outside of the difficulty options, there are a few other things that stand out in Coromon. First of all, I think the area theming is exceptional. The second town that you come across on your adventure is a little farming village. There are a few quests you do here that fit that theme, but the detail that really stood out to me was that instead of having a big, modern facility for healing your Coromon, it has a farmer who will take your Coromon and let them play in the fields to regain your health.

Fast travel is an option for you from the very beginning. Instead of having to find an HM to teach a Coromon to Fly, you can use teleporters in towns to jump from one to another. You can reassign attacks between battle. There’s an option to auto-run instead of having to hold a button down to use your sneakers. Heck, you can even set up a shortcut so that holding down the pause button takes you straight to the option to rearrange your team!

You can also customize your Coromon’s stats in a very cool way. Every few levels they’ll unlock some hidden potential, allowing you to attribute three stat points to their different abilities. It’s not a lot, but it’s a cool tweak. The potential system also replaces Shiny Pokémon. Standard Coromon have one sprite color, while Potent have another and Perfect have a third. Plus, the higher the Potential score the Coromon has, the more of those bonus stat points they’ll unlock, so Shinies are more powerful!

Finally, there’s a Milestone system built into this game that constantly has you checking off tiny achievements for small rewards. These aren’t groundbreaking, but it’s a little extra treat that gives you a little boost of dopamine constantly. Getting pats on the head every few minutes is great.

Alright, so there are a few things in Coromon to help set it apart from Pokémon. The difference is that instead of doing something totally new, all of these little options and adjustments feel like they could fit in the Pokémon franchise. Instead of feeling like Pokémon and some other game got chucked into a blender, Coromon just feels like another Pokémon game. It’s like there was a totally unique GBA Pokémon game that never got released, and it’s now been polished up and released on the Switch.

It’s fantastic, and with the few things it does differently than Pokémon, I actually think Coromon could be a great entry point for someone who has never played a Pokémon game before and is a great option for fans of the genre!

Geek to Geek Rating: 5 out of 5 Coromon Spinners