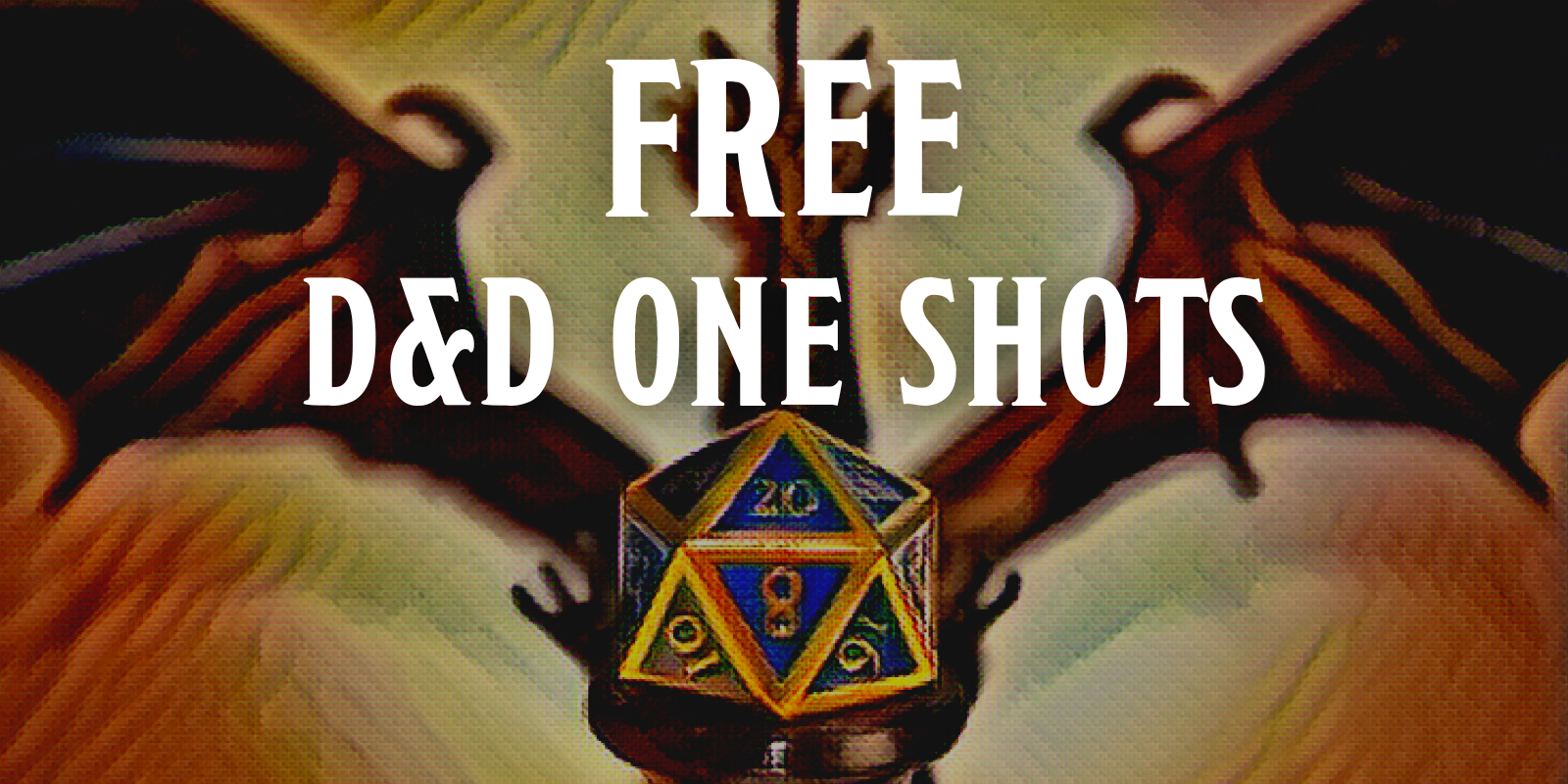 Not every Dungeons & Dragons game has to be part of an epic saga. In fact, many these days are not. Whether it’s a special event at a game shop, a convention, or even a gathering of friends who just want to have some fun, a D&D one shot adventure might be the perfect fit. A D&D one shot can be run in a single session rather than span weeks, months, or even years.

They are basically Dungeons & Dragons short stories that you get to play. Best of all, a lot of the best D&D one shots are entirely free:

It might sound crazy, but Grammy’s Country Apple Pie is my favorite one shot available for D&D 5e. Read that introduction and you’ll see why! It’s a wizard who wants you to recover an apple pie recipe! Why? Because he wants some pie! It’s great.

I’ve run this module a few times, and each time to a different result. In one, it was wanton slaughter of goblins, in another a player hosted a race-relations summit between goblins and humans in a village nearby, and in yet another, the party took over the bakery, hired the goblins, and began working on an international apple pie empire. It’s great.

The one-shot itself is free and put out by Wizards of the Coast, but if you want to support the creator, you can also buy it on DMs Guild for a buck and get a hand-drawn map to run the encounter with on a VTT as well as some pretty cool pre-generated characters. I also made my own map for the adventure using Dungeon Alchemist that you can see below. Just click the image to open the full-size map.

If you end up running this free D&D one shot, let me know. I need to know how your party handles things.

Another silly D&D one shot that you can nab for free is Wild Sheep Chase. If you’re not a fan of silly D&D, you may want to skip this one, but if you are…there’s no way this description won’t have you hooked immediately.

Adventure, danger and a decent dose of downright weirdness erupt when the party’s attempt to grab a rare afternoon of downtime is interrupted by a frantic sheep equipped with a Scroll of Speak to Animals. Soon they are dragged into a magical grudge match that will test their strength, courage and willingness to endure extremely baa’d puns.

Trending
JRPGs That Really Need to Be on the Nintendo Switch

Will our heroes be able to overcome a band of transmuted assassins on the hunt for a mutton dinner and fend off an extremely bitter ex-apprentice packing a dangerously unstable magic item? There’s only one way to find out…

Wild Sheep Chase should be possible to run in a single session of 3-6 hours. The designers put this one together really well. Plus, the download includes all the maps you need to do it in person or on a VTT. Plus, it’s one of the few adventures I’ve seen that is pretty much written to be used out of the box. You shouldn’t have to spend a long time prepping to run Wild Sheep Chase. It’s totally worth the price.

This one is a free 5e one shot, for sure. But you can choose to purchase this one on DMs Guild to support the site. (Which is very worth it, IMO, as it’s a fantastic resource.) That said, you can nab the PDF for free directly from Wizards of the Coast.

A trek toward Icewind Dale turns deadly when an avalanche blocks the heroes’ passage through the Spine of the World. Rescued by a menagerie of strange creatures, the heroes are asked to return the favor in exchange for answers about what’s happening in the cold and frozen North.

There are three really cool things (heh, heh, puns) about Ice Road Trackers. The first is that it introduces players to Icewind Dale and can directly tie the party into the Rime of the Frostmaiden hardcover. You can run this one in the Adventurers League organized play if that’s how your local game shop does things. And finally, you can do it in a single 4-hour session or across 4 one-hour sessions. That’s pretty unique among any modules.

Frozen Sick is a little different because it’s available for free on D&D Beyond and on Roll20. It’s based in Exandria, the world of the hugely popular Critical Role, which means that you may either love this or hate this because of that alone.

But, even if you’re not a fan of the show, I think you should absolutely give Frozen Sick a shot (a…one shot? hah!). You will find a fully fleshed-out setting, intriguing hooks, well-paced encounters, and strong narrative.

As I said, you should also be able to access Frozen Sick for free on Roll20 just by making an account, which means you get full access to tokens, maps, and everything you need to run it without having to prep it and set it up manually. Obviously, you need to read it and prep a bit. But you won’t have to set up the VTT for your party, and that’s worth its weight in gold. Or maybe even platinum.

Heck, I’ve used the Frozen Sick module in Roll20 a few times as a base for sessions. Without even touching the story. The tokens, maps, and different monster stats are great to pull into games as miscellaneous content.

Okay, so this is me being shameless. But bear with me. In late 2020, things were awful in my life (and the rest of the world, admittedly) and part of what I did to cope with that was to write up a fun, silly, Christmas-themed D&D one-shot. I put it up for free on DMs Guild, and it turns out that people really enjoyed it, and the reviews and ratings seem to indicate that it really is a good, fun, one-shot.

So, yes, I am being both shameless and biased on this one, but I’m very proud to have a one-shot that has nearly 6,000 downloads and ratings and reviews that hold up to anything above it on this list. So yeah, download Claus for Concern, and I bet you’ll have a great time during the holidays.

What Are Your Favorite Free D&D One Shots?

These are just a handful of the amazing free D&D one shots out there. I’m sure I will have another post up soon enough that goes through some of the best paid ones, too. That said, though, what are some of your favorite free one shots? Have you run something special that you want to share? Let me know in the comments or give me a shout on Twitter!

And looking for the best D&D for Beginners that may not be a one-shot? Our review of “The Lost Mine of Phandelver” may be just what you’re looking for. Or maybe the most amazing D&D titles on DMs Guild?