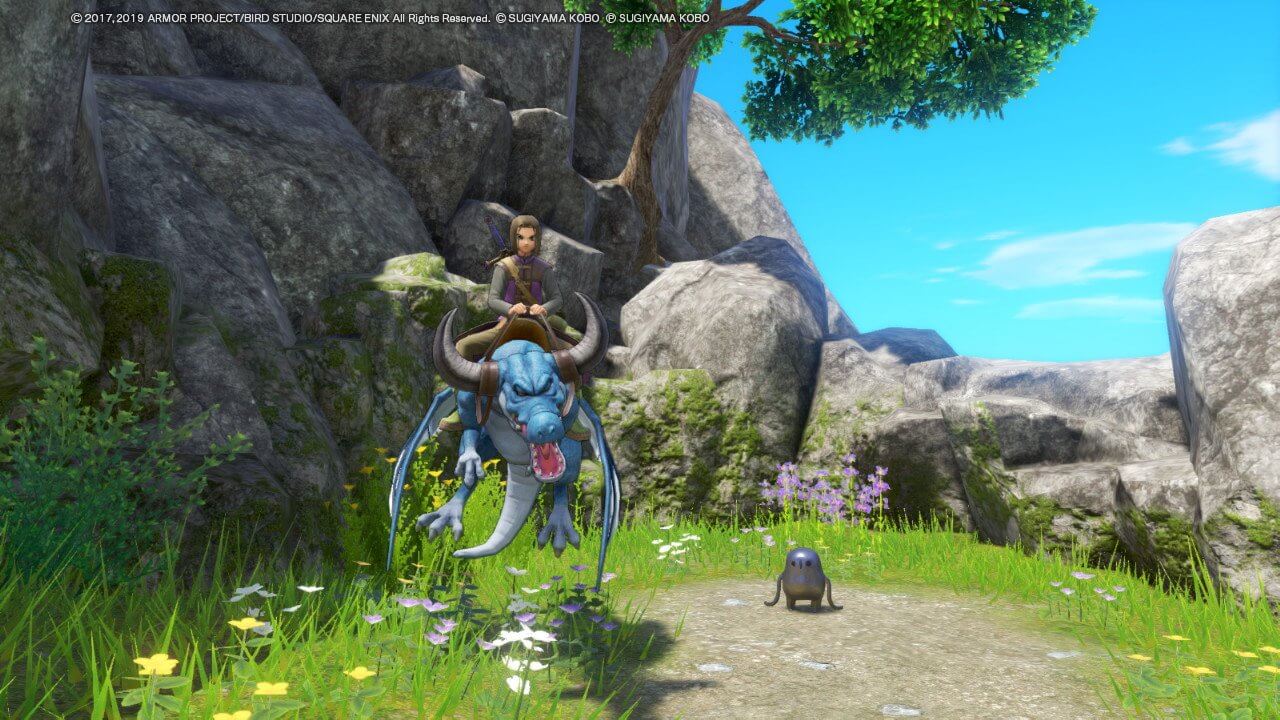 This week, I want to talk about one of my favorite new additions to Dragon Quest XI S: Tockles, Tickington, and Pastwords. For a year, I was hoping we’d get the Yocchi Village content from the Japanese 3DS of XI here in the States. On the blog and on the podcast, I talked about it A TON! So I was super excited when it got confirmed that Yocchi Village (called Tickington in English versions of DQ11) was coming to English speakers and that we get to do the Dragon Quest 11 Tickington quests.

The mechanics that go along with Tickington are pretty simple. It works something like this: around the world of Erdrea there are Tockles (they were called Spirits of Lost Time in the Japanese version). The Tockles are colorful and cute and look like this.

They’re hidden around the world, and you have to find them. When you do, the Tockles give you a pastword when you speak to them. Learning a new pastword unlocks a new area (in Tickington) from a past Dragon Quest game (even Dragon Quest X!), which you can visit in 2D! When you complete all of the quests available for a specific game, you get a corresponding statue in the Altar of Ages.

It’s easy to use the pastwords, too. You head to Tickington (you can Zoom to Tickington, by the way), go into to the Altar of Ages, and visit these past worlds with your pastwords. It’s awesome, and I love it!

If you’re looking for how to get to Tickington without Zoom, you will find the entrance at the checkpoint to Gallopolis. Just talk to Tickle the Tockle, and he will teleport you there.

From my earliest days of playing the PS4 version of Dragon Quest XI in 2018, I was obsessed with the little ghost guys known as the Spirits of Lost Time. I loved them so much that I went out and bought a plush of Kurucchi. In the Japanese version of DQXI for the 3DS, he’s called Ickle, and he’s your Tockle sidekick. Sadly, that’s one part of the game that’s still missing from English versions.

I loved all of this so much that I even bought a special Dragon Quest edition of a Japanese 2DS and the 3DS version of XI to not have to wait to experience it. Keep in mind that I don’t understand a single word of Japanese!

Note: unlike the Switch, the 2DS and 3DS are region locked, so you can only play Japanese games in a Japanese system, NA in a NA system and so on. The Switch is region-free, so you can use carts from around the world in any system. Just wanted to clarify.

In DQXI S, these Spirits of Lost Time (or, at least, some of them) are called Tockles. They come in various colors like blue and yellow and red, and they’re hidden all over the world map of Erdrea. In my last post, I mentioned that finding Tockles was a lot like mini-medal hunting in that it encourages thorough exploration.

And like mini-medal hunting, searching for Tockles was a highlight of my latest playthrough of the game. It’s probably my favorite part of the new content they added to Dragon Quest 11 S.

My favorite Tockle is probably Tickle, Ickle’s uncle. He has a bowtie and he’s named Uncle Tickle, which I still find both hilarious and creepy. He’s also the one that sends you to Tickington.

Like I said, each Tockle you find will tell you their unique pastword. That pastword then unlocks a new area from a past Dragon Quest world, 1-10. Just talk to Uncle Tickle and head on over to the Altar of Ages in Tickington.

The coolest part about all this is that you can visit places like the Quester’s Rest Inn in Dragon Quest IX, Chateu Felix in VIII, and even Castle Baramos from III. They’re all rendered in the DQXI S 2D engine, so it’s really cool to see these familiar locations in a new way.

You can unlock three different areas for each altar (each game, in other words). Some of these feel kind of cheap and that the player gets cheated. Like, maybe one patword opens up a daytime version of a locale, while the next pastword unlocks a nighttime version of the same place.

Overall, though, it feels like you get just the right amount of past worlds. It’s enough to feel fun and nostalgic, without distracting too heavily from the main story events of XI.

What I don’t suggest, though, is playing through the entire Tickington quest in a single sitting or without breaking it up by doing other stuff. It can get a little trudging at times, but it doesn’t really feel that way if you break it up by advancing the story or doing other sidequests in between.

Tickington itself is a bit of a letdown in XI S, especially if you played the 3DS version. I understand that not a lot of the Western audience has seen that version of the town, but in comparison, I was a bit underwhelmed. There isn’t much to do in the Switch version of Tickington, other than smashing a few pots, talking to a few NPCs, and visiting the Altar of Ages.

Quite a few things seem to have been removed. I am sure I will do a post on the differences at some point. So keep an eye out for that. One thing I will note, though is that Tickington is in 3D on the Japanese 3DS, not just 2D. This seems like an odd change for the West. Maybe it has to do with Switch cart space issues. Who knows?

Until then, just know that not a lot has changed in terms of Tockles and Pastwords, so you’re still getting the full Alter of Ages experience. We just don’t get the expanded (and 3D) town to wander around in.

The Altar of Ages

In XI S, the Altar of Ages is where the action is. It’s really the only reason for visiting Tickington at all, and through the books placed on altars, you visit past worlds using pastwords. That’s fun to say.

I had originally started to list some of my favorite moments from visiting past worlds here, but I realized that post is just much too long. So…here’s a post that includes a rundown of my personal highlights from visiting past DQ games in Draogn Quest 11 S through the Tickington quests.

What are your favorite parts about Tockles, Tickington, and Pastwords? Have you found the secret that lies beyond the Altar of Ages yet, too?