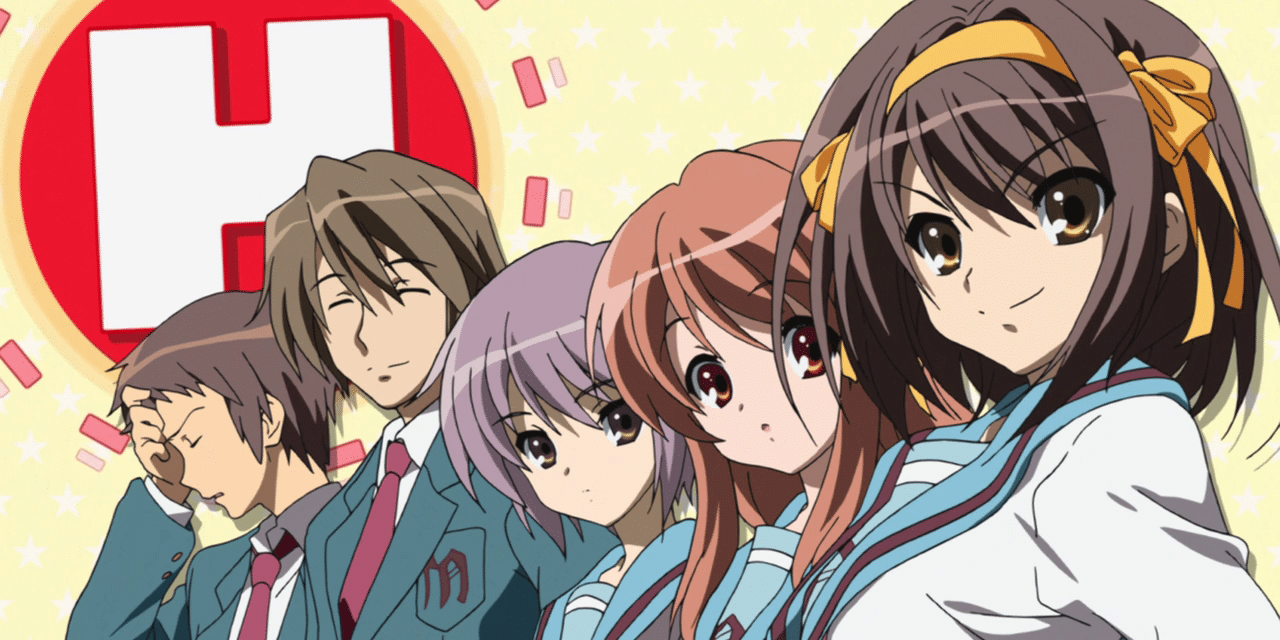 The Melancholy of Haruhi Suzumiya is available to stream on Funimation.

If you’re watching it for the first time, I strongly recommend watching it in the order that it was released.

It’s been fifteen years since The Melancholy of Haruhi Suzumiya originally aired on television.

It’s been well over a decade since The Disappearance, the time Kyoto Animation touched this series.

I feel my bones creaking as I write this.

Haruhi Suzumiya was already out and relatively popular by the time I started watching anime.

…well, intentionally watching it, at least. I’d caught a Ghibli marathon on television before, and I’d gobbled up 4Kids’ hit-or-miss adaptations in the early 2000s. Technically, I’ve more-or-less been watching anime since the Pokémon bug hit.

But I started seeking it out in 2009, right as I was at a bit of a change in my life. And Haruhi struck me as incredibly “anime”, more than most.

Quick detour to correct myself here: something being “incredibly anime” both is and isn’t a fallacy. Ghost in the Shell has little more in common with Kiki’s Delivery Service than The Lion King does with The Simpsons. But, at the same time, I’m sure some stereotype popped into your head back there. Some rough-and-tumble martial-artist shouting and shooting energy-beams from his fist. A boy and a girl meeting beneath a cherry tree. Giant mecha with beam swords and laser rifles.

A few things just keep on popping up.

And Haruhi Suzumiya was both about embracing all of these things, and putting them all under its cheeky lens. That makes it a bit of an odd duck to start out with, considering its whole “I-want-fiction-to-be real” premise . Still, it’s not like any storytelling tropes and clichés are really unique to that medium; anime was the focus, but Haruhi was a whirlwind tour of send-ups to pop culture on the whole.

How else do you explain this “loving parody”?

And, if three-and-a-half years already of essays so far (!) hasn’t made that obvious, I’m all about appreciating a story on its own strengths and merits. For a show with an absolute sourpuss of a protagonist, Haruhi Suzumiya loves to do exactly that.

Well, I mean, Haruhi Suzumiya the show, not the titular character – though, come to think of it, the former derives so much of its energy from the latter. Boy howdy do I hope those two don’t get confusing.

It’s this wonderful blend of differing ideals – and differing levels of criticism. On one end of the scale, you have the show’s protagonist, the wettest of blankets, who thinks way too critically of everything. On the other, you have Haruhi (the character, not the show), aggressively un-critical, who insists that things be “more fun” to everybody else’s detriment. And in the middle, everybody in a push-and-pull to make sure those opposite ends don’t snap the scale itself in two with their bickering.

The character dynamics were literally about the powers of practical pessimism vs. bright optimism, without fully condemning either. It would at once make meta-references to the kind of story the characters were in at the time, but also earnestly lean in and live in that moment. It’d swings wildly between “talk your ear off” and “pointedly obscure”.

It was also a show where a living alien supercomputer uses their phenomenal powers to cheat at baseball.

Haruhi (the show, not the character) was just fun to watch.

But I managed to catch the second-season bandwagon right as it was airing, less than a year before it saw a film adaptation. Then… that was the end of the series’ time on-screen. And as is the way with a lot of these things, that was kind of the end of its presence for me.

The last Haruhi Suzumiya novel hit my clunky tablet reader in 2011, less than a year after the movie. After that, for an incredibly long time, the series fell into that purgatory called “indefinite hiatus”. One or two spin-off stories came around, but while the cast was the same, their tone and focus were entirely different. They just didn’t scratch that same itch.

I moved out of college. I got an “adult” job. Life happened.

I bought a bookshelf for my apartment, and the Haruhi light novels were too far out-of-print to make the cut.

Haruhi became a past-tense story in my life. I’d loved it at the time, and it was a great point of reference for thinking about other stories. But that was then, and now I’d go build on that with the next story that came into my lap. A decade went by since these characters took me on a new adventure.

I’d think of them, time to time, but always in the way you remember friends you haven’t seen since high school.

After a nine-year hiatus, another book finally came out. And not only that, but the English releases were being re-printed. A healthy mix of nostalgia and a chance to look at them with older eyes.

So I started reading them, for the first time in my life post-graduation.

Now I don’t know if I’ll finish them.

I won’t be the first or last person to tell you that nostalgia is a dangerous distillery. It filters out all the crud from the original product, conveniently forgets all the filler, and leaves you with a golden essence.

The memory is liquid gold, but the actual thing was maybe a little more golden-brown.

And I don’t want to say that the novels are objectively trashy or anything. All the things that I originally appreciated are in there – the monologuing right up against the absurd, with just enough tongue in its cheek to pull things off.

But, even and especially with the rose glasses off, the text just doesn’t hold up.

Sometimes it’s literally. There’s just a lot of awkward, passive wording in these books. Maybe a choice to get closer to the original text, sure – but I’d stop and notice long and disorienting sentences, which you just don’t want in a novel.

Sometimes it’s more up to taste. This story just grabs me less when the first few books are told in chronological order as-written. One of the smartest things Kyoto Animation did was pull apart its volume-one “origin story” and pepper in “flash-forward” adventures to entice the audience into what was clearly coming.

Sometimes it’s things that were never okay, but are even more deeply not-okay now. That second book gets entirely too much mileage out of a slur I won’t re-print here.

And oh, on that note, the protagonist goes from “bellyacher” to full-on obnoxious. Granted, he was always an unreliable narrator – even in the show, where his narration was peppered with half-truths, or his face would leave camera to obscure which monologues were even internal.

But here, in the interest of selling a “secretly enjoys this dog-and-pony show” version of the character, they’ve also given the audience a proper window into his color commentary on the world. It isn’t great – he’s a high schooler, after all, and with respect to current high schoolers, we’re a little self-absorbed at that age.

Some dirtbaggery can be written off as “he’s young; any smart dialogue is compensating or for the sake of the story”. A lot of it, like making the reader sit through his obvious leering at everybody around him, isn’t. And his doggedly-passive attitude is a lot harder to sit through when the character clearly knows perfectly well that he’s being complicit.

Being the second-worst person in the room doesn’t remotely make you a good person.

I’m more mixed on Haruhi Suzumiya series than I’ve ever been.

But I’d like to think that, at least a little bit, I had okay taste back then.

Maybe it’s bargaining, but I genuinely think that that old anime was the better version of these stories. Obviously you can express certain things more clearly with the benefit of sound and motion. But there’s as much in what they didn’t show – letting the characters be more morally-ambiguous, or burying the lede on its whole premise for its famous pilot episode.

The story took more risks, too – letting characters navel-gaze for minutes at a time in ways that you’d forgive more easily in text. And, if you’ve watched the series, I don’t have to tell you about the most clearly-divisive risk associated with the brand, love it or hate it.

While the studio has more than enough to do while getting back on their feet, I can’t say I wouldn’t be over the moon for Kyoto Animation to take another crack at these stories now that they’re re-circulating. Maybe they’d figure out some way to tie the rest of the books together in a climactic build, with the benefit of hindsight.

Haruhi Suzumiya (the show, not the character) is from 2006.

And those are hardly fair to weigh against each other.

Now I’m in my thirties – hardly the oldest person writing for this site, sure. But still old enough that critically analyzing shows with seven-year-old protagonists could come across as a little weird.

Stories from a decade ago have “could’ve-been” and “the way things were” hooks still in my brain. Those I read today can directly relate to today, either the actual state of the world or just the state-of-mind I’d like to live in for a bit.

Transplanting a story from one to the other can be a tricky business. Oftentimes, they don’t hold up in the same way that a peony won’t always “hold up” you try to move it to a new, ostensibly better pot.

But even if they can’t successfully make that jump, seeing where they fail can be more telling.

That’s where the “taste gap” is – the difference between what you thought was great then and what you think is great now.

And stories that can’t measure up make for a darned good yardstick.