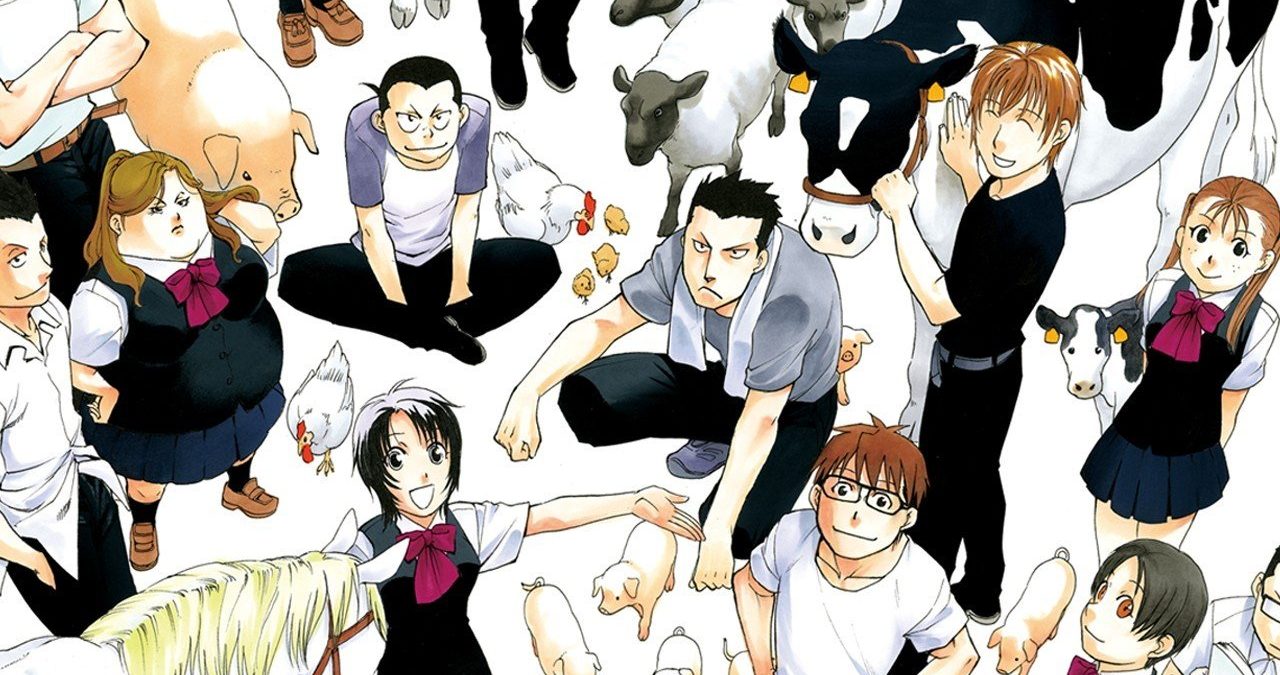 Silver Spoon is available to stream from Funimation, as well as on Crunchyroll and VRV.

Man oh man does anime love to geek out over the most oddly-specific stuff.

Sure, you get that with other TV and film, too. It’s kinda the whole point of documentaries. But fiction on the whole doesn’t go to those lengths nearly so frequently or enthusiastically – even more rarely outside science-fiction. Anime and manga, though? Those writers will talk your ear off about whatever topic catches their fancy.

Asteroid in Love is a relaxing story about kids who’re gung-ho about astronomy. That’s it. That’s the whole pitch.

Haruhi Suzumiya, an especially-formative series for me, was awful about it. The dialogue would regularly veer off to talk in circles about time travel continuity or the Kardashev scale or any old topic that author Nagaru Tanigawa probably read about that week. Did most of it move the story or characters one way or the other? You bet it didn’t. The man apparently loves to ramble on using his characters as mouthpieces.

Famously, Cells at Work looks at a surface level like Osmosis Jones, but more in every way. Two seasons and a movie of animation, five books, and easily half a dozen spinoffs. For what? A slice-of-life show about how your Platelets and Neutrophil interact in your bloodstream. But one that’s so thorough that it’s apparently used as a teaching tool in honest-to-goodness classrooms.

We went to the farm instead.

I grew up in Iowa, and if there’s one thing that we were famous for there, it’s farmland. And not just in a stereotypical way, either. Even living in a town of about eighty thousand, it was always obvious that the state doesn’t exactly lean away from the “corn belt” moniker.

Our state fair indulges in butter statues and more livestock shows that I could ever remember in a list. I went to a state university with honest-to-goodness barns and horse stables on campus. Heck, the #1 summer job for students is still farmhand work, either because detasseling is the only gig hiring under-16-year-olds or just because everyone has an acquaintance who needs help feeding pigs.

Author’s Note: Detasseling is a job where you wake up at 5AM to go pull the “hair” off a field of corn, which I keep forgetting is such a specific task that autocorrect doesn’t even recognize it.

So it doesn’t take much to imagine what happens when an anime club in Iowa watches Silver Spoon:

We have some powerful Agricultural Opinions.

And that tends to go in one of three ways:

All of which make it sound uncomfortable, like watching an Epcot-style funhouse version of what you know to be true, right?

A lot of us in geeky fandoms – even and especially anime fans – love to bicker over semantics when we have even a lick of knowledge in an area. How else do we get professional linguists and taxation lawyers writing thousand-word articles and official bulletins on the “Is a Hot Dog a Sandwich” argument?

( By the by – the combined expert answer is apparently “not in conversation, yes for tax reasons”. The more you know~ )

But I’ve never felt that combative about Silver Spoon – or with any other anime that revolves around a real-world subject, for that matter. Instead, any discrepancy feels more like a quirk of the writing.

And that’s because its clearly not trying to be a documentary, or even non-fiction.

And if it informs us a little along the way? That’s just a fringe benefit; I’m not trying to learn Animal Husbandry 101 watching an anime, after all. At that level, I’m just massaging an interest.

Or maybe just a slice of nostalgia.

And yeah, tending the hog barn is objectively a weird thing to have a nostalgia for.

But that doesn’t stop author Hiromu Arakawa from writing fifteen volumes of manga and two seasons of television about it. Simplified or not, writing about a subject for that long is as sure a sign as any of pure enthusiasm.

And, at least, it’s trying.

I absolutely cannot understate how much that counts for.

I have to wrack my brain to think of a broadcast TV dramas with such a specific setting, or pop novels that indulge nearly so much in fringe interests. Just ask anybody who’s watched a live-action broadcast superhero show; for many, the fact that The Flash is on popular television can feel like set-dressing around routine interpersonal drama.

But do you want to read a manga just about tent camping, or competitive card-matching, or publishing a dictionary?

There’s a drama series around each of them, each one consistently keeps that subject a front-and-center driving force of the story, and they’re all unironically some of my absolute favorites.

Take this summer’s Wave, Listen to Me! – a fiction about radio broadcasting. Not in the Frasier sense where it’s the protagonist’s day job, mind you. In the actual, nitty-gritty “this is how a cough box works” and “how do I find sponsors for a 3 A.M. time slot?” sense. And that’s on top of its clear and deep affection for Sapporo’s bar scene, coming through in the same sense as Hollywood’s obvious romance for Los Angeles.

That kind of enthusiasm is infectious, and it’s exactly why geeks tend to band together even if our interests don’t exactly line up. It’s even a huge part of why a lot of us seem pre-disposed toward watching anime: it’s a medium that wears its heart on its sleeve. It gets jump-up-and-down, talk-your-ear-off excited about minute subjects in the same way we do.

We can sense that, and we’re willing to forgive a lot of hokeyness and naivete for that pure energy.

Because it’s playing on our home turf: anime sits at the nerd table where we’re all giddily talking over each other about The Cool Thing We Found This Weekend. Everybody wants their turn to talk, everybody wants to discover something exciting, and we’re all the richer for it.

That’s the kind of kinship that can draw and hold communities together.

Even if it’s just to gawk at where your breakfast comes from.

Want to watch Silver Spoon ad-free on Funimation’s website – or any of the other shows mentioned by title in this article? Reply to the @GeektoGeekMedia Twitter account ( @geektogeekcast ) with the hashtag #FunimationGiveaway for a chance at a 3-month premium subscription!