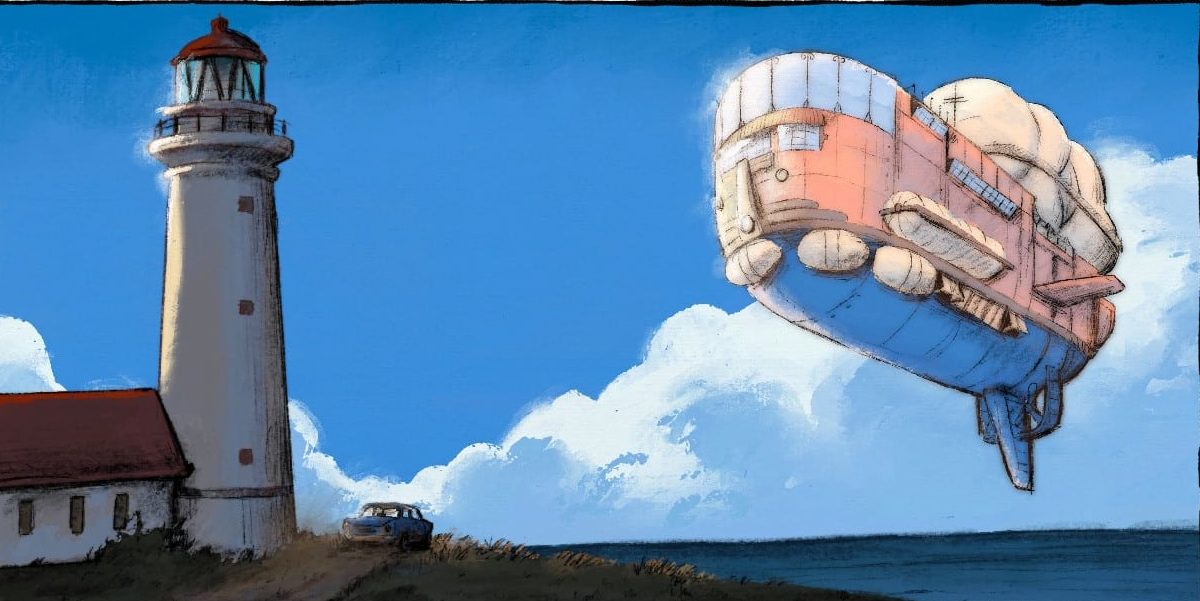 Wayward Strand can be aimless at times and difficult to wade through at others. Oddly, I don’t find either of those things to be a detriment.

Independent games have a real knack for slipping players into delightful experiences – even and especially the mundane. A traditional painter. An actually-simple traveler. A campsite groundskeeper.

But a candy striper is a new one for me.

The entirety of Wayward Strand is set on a floating hospital, following bookish Casey as she’s roped into assisting her mother with its geriatric ward. It sounds like the setup to an pensive novel, possibly even a stage play. And with the admirable level of love and attention put into each character’s dialogue and vocal performance, it may well hold up in that format.

But I also adore this game as it is.

The story is actually fairly open-ended beyond that description; while there are clear day-to-day plot threads, there’s little pressure to follow any individual one. In fact, the world seems designed to ensure that you miss some, each slowly and independently plodding along in real time while you’re stuck listening to another rehearsal from Mr. Avery.

Wayward Strand can be aimless at times and difficult to wade through at others.

Oddly, I don’t find either of those things to be a detriment.

It’s common enough to say a game unfolds “organically”, but usually what we really mean by that is a clever knack for timing. Everything still unfolds – for the most part – in a planned order that “feels right” for lack of a more concrete description.

Wayward Strand‘s story direction strikes me as organic in the same way that you might call Breath of the Wild‘s exploration organic. Yes, the game provides you clear lines of investigation and highlights important things as they happen. But none of those are really guiding you onto a path; just further into the ever-expanding weeds. And, as a result, Wayward Strand often feels like it lacks a “canonical” backbone to its story.

You start with an almost arbitrary line of investigation, a story about the airship itself for your school paper. But that dries up very quickly as your character’s interest – and, presumably, yours – gets immediately more personal. Who is old Mr. Pruess’ wife, who performed aboard the airship in its cruise-liner days? Why is Ted the mechanic so dodgy talking about his job with the engines?

And in Wayward Strand‘s claustrophobic dollhouse-like view, there’s always a sense that some totally unrelated, micro-scale drama is happening in the very next room, just out of earshot.

But sometimes organic growth, oddly enough, means hitting some hard hang-ups. At the end of your very first day, your mother comes to collect you. Naturally, she fusses over whether you’ve been actually helping around or goofing off with “that notebook of yours”. And as far as I can tell there’s nothing you can do about it – I spent all of my first day making sure each patient was tended to at least twice, offering to physically help with chores at every turn, and she still chewed me out, apparently not actually listening to a word I said.

It can read as irritating plot railroading, sure. Or it can speak to that truism that some mothers are genuinely impossible to please.

All in all, Wayward Strand is so much more concerned showcasing these small inevitabilities than using its format for the murder-mystery you might expect. It’s a small game about even smaller stories, all layered on top of and inside one another and crammed into a single rustbucket.

For all it’s doing well, Wayward Strand does let a few quirks of its interface get in the way.

One might be relatively tiny text for such a dialogue-heavy outing – luckily fixable through a quick jaunt to the options menu. A much larger one might be its sub-standard save system. You can only truly save your progress at the end of the day – and this story is only comprised of three rather slow-moving days. Granted, Wayward Strand isn’t a long game overall, clocking in at a little less than five hours. Still, an inattentive player is liable to accidentally lose a whole hour’s worth of conversation by quitting a smidge too early, a trouble that’s exceptionally rare in modern narrative games.

There are also a few technical hiccups here and there – I did once catch a nurse “carrying” a tray with her knees. And, while movement is purely a tool to move from conversation tree to conversation tree here, it still feels… sluggish. Perhaps young Casey just doesn’t have her air-legs about her, but it never quite felt clear whether I wasn’t pushing the thumbstick far enough or a door was simply off-limits from the game’s perspective.

But if it sounds like I’m nitpicking, it’s because I am. Any problems with Wayward Strand are small, and melt away when you’re waist-deep in a conversation with Esther about her horoscopes. The stage-hands can maybe afford to drop a lighting cue if their actors are still on top of their performance. And the performances are almost never off in Wayward Strand.

As I write this, I’m looking down the barrel of a family funeral on Tuesday. All my memories of this person are set in her twilight years, old enough to want for company but still willful enough to insist on a “yes, ma’am”. Very set in her ways, stern, if softening a bit from a lack of energy. I see so much of her – and of others in her generation – in this cast. It’d be ridiculous and irresponsible to claim that I can separate my feelings about Wayward Strand from that.

But, of course, we’re not meant to. Stories exist for their readers, and are meant for each of us to take our own experience into. I borrow from my experiences with a sufferers of a stroke, and I quietly understand when Mr. Preuss can’t quite answer a question fully. I see a staff overworked, and I do all I can to, at the very least, not exacerbate their work. And even when Dr. Bouchard is infuriatingly bristly, I keep trying to get through, because it feels like the right thing to do.

And, sometimes, I get to watch all three bump up against each other in a slow-moving wreck, and wonder whether I’ve pushed them onto that path – or might have pushed them off it with a touch more insistence.

Wayward Strand is having me think long and hard about it after I set it down, the same way that I think critically but fondly of many of my favorite books. It’s always an absolute treasure to find a game like that, and while it has its sore spots, those only add to its wrinkled charm. It’s the sort of thing that sticks with you despite its brevity, and I’d love to see more follow in iits spirit.

Geek to Geek Rating: 4.5 knitted scarves out of 5