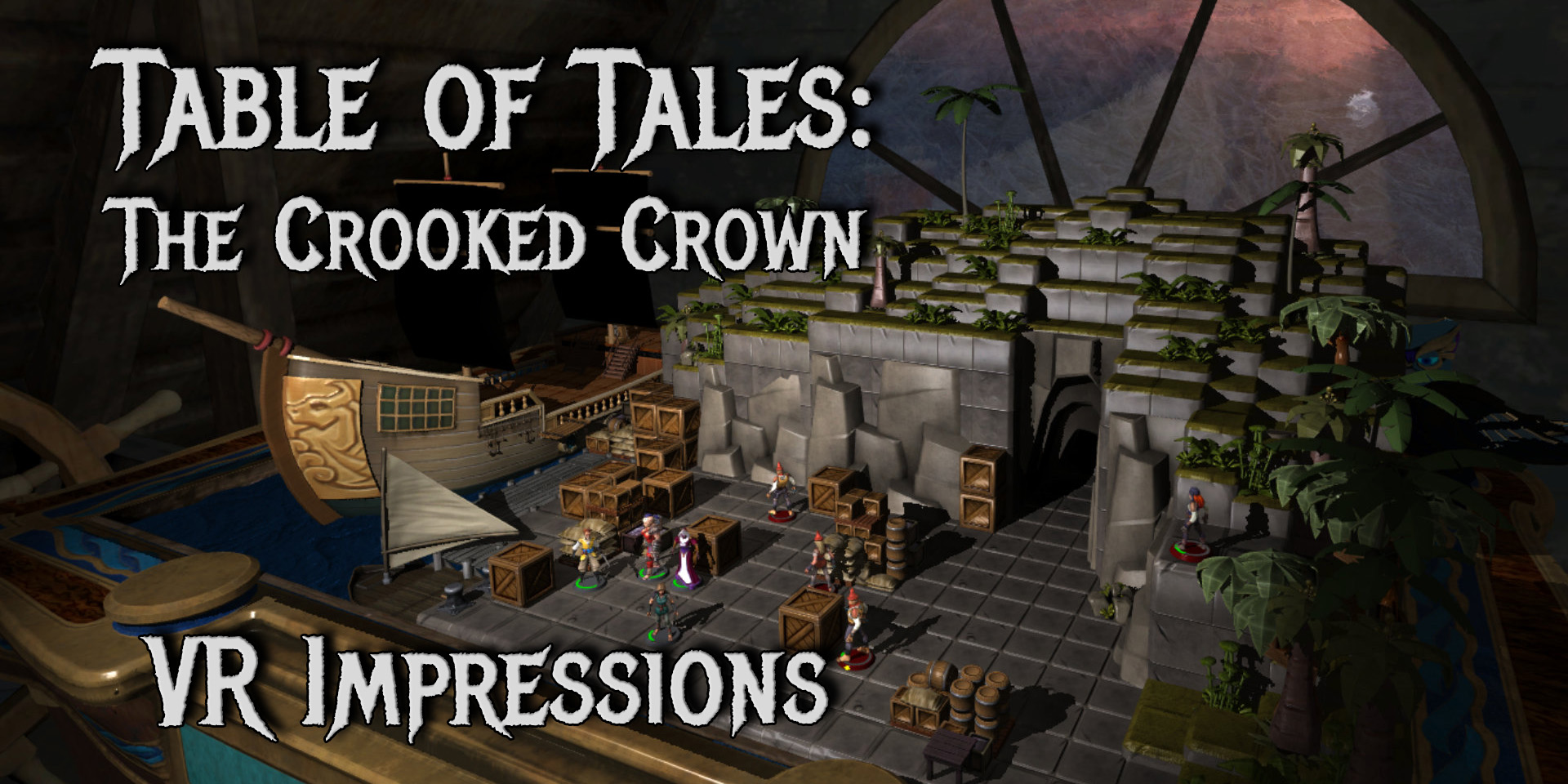 Table Of Tales Is Way More Immersive With A Quest 2 Headset!

by Troytlepower | The Geekery

Table of Tales is fun on the Switch, but now that I’ve seen the immersive VR experience it’s clear that that’s where it belongs.

Title: Table of Tales: The Crooked Crown
Release Date: July 14, 2022
Price: $19.99
Suggested Audience Age: Rated Everyone 10+ by the ESRB
Time to Play: 5.5 hours, according to How Long to Beat
Availability: Switch, PlayStation, Steam, Oculus
Recommended for fans of: Pirates, Tactical Combat, and Table Top RPGs
Geek to Geek Media was provided with a review copy of this title.

Last week I shared some thoughts on the Switch port of Table of Tales: The Crooked Crown. The game was originally designed for PlayStation VR but made its way to the flat screen pretty well. I was also given an opportunity to check out the Meta Quest 2 version of the game, and it’s pretty fantastic.

Table of Tales: The Immersion Version

The core premise of Table of Tales has you moving pieces around grid-based environments on a magical table while a magical bird narrates the story to you. This setup was clearly designed for VR, as the player perspective has you seated at the table for the entire adventure.

I know it’s bland to say that the VR version of a game is more immersive, but it makes an exceptional difference in this case. In the Switch version, the camera would snap to specific characters when they were the focus of a scene. In the VR version, a spotlight is used to draw your attention instead. This works well to help the player know where the game wants them to look while allowing a lot more freedom. Since the cutscenes are only animated by fairly rigid figures bouncing around, you never miss much by watching the narrator or just looking around instead.

One of the super neat features of the Quest 2 is the ability to play games just using your hands (instead of any kind of controller) using the headset’s hand-tracking abilities. In Table of Tales, that’s actually the only control option available, and it feels like a natural fit.

Note: After writing this article, we discovered that you can play the game with controllers. It works exactly like you’d expect, but isn’t as neat as being able to pick up the pieces with your hand.

You move your pieces around the game board just by reaching out and picking them up. It’s a natural motion that works with the premise of the game. Occasionally I ran into an issue getting the game to recognize which space I was trying to move to, but since you can shift around inside your available movement space as much as you’d like it was never a real problem.

The different attacks and abilities your character can execute are represented by cards. In the Switch port of the game, these felt like kind of awkward floating squares. In VR, the cards pop up in a card holder on the edge of the table. To take an action, you pick up a card and drop it on the target. Again, there were sometimes hiccups with exact placement, but the delight of just plopping an attack on an enemy outweighed that every time.

The only real issue I ran into in the Quest 2 version of Table of Tales: The Crooked Crown was a very specific function of the hand-tracking. Like most VR games, there’s a chance of getting just a bit out of alignment as you move around in the space. Recentering the camera is a basic function that any VR user should get used to using immediately.

Now, I’m not sure if this is a function of Table of Tales specifically or the Quest 2 hand-tracking system at large, but the recenter gesture is way too sensitive. As near as I can tell, any time you make a closed fist, the camera realigns itself. The problem is, the basic, relaxed way that my off-hand rested while I was navigating Table of Tales with my dominant hand read as a fist, so for the first few minutes of the game, the camera was constantly trying to reset. Once I figured it out, I basically kept my left hand under my leg and out of sight for the rest of my time with the game.

I really like the core setup and gameplay of Table of Tales: The Crooked Crown, and think it’s a game worth playing for anyone looking for a light, seafaring tactical adventure. The game works just fine on Switch, but if you’ve got a Quest 2 and the time to spend in VR, then the immersive perspective and hand tracking make for a unique gaming experience.