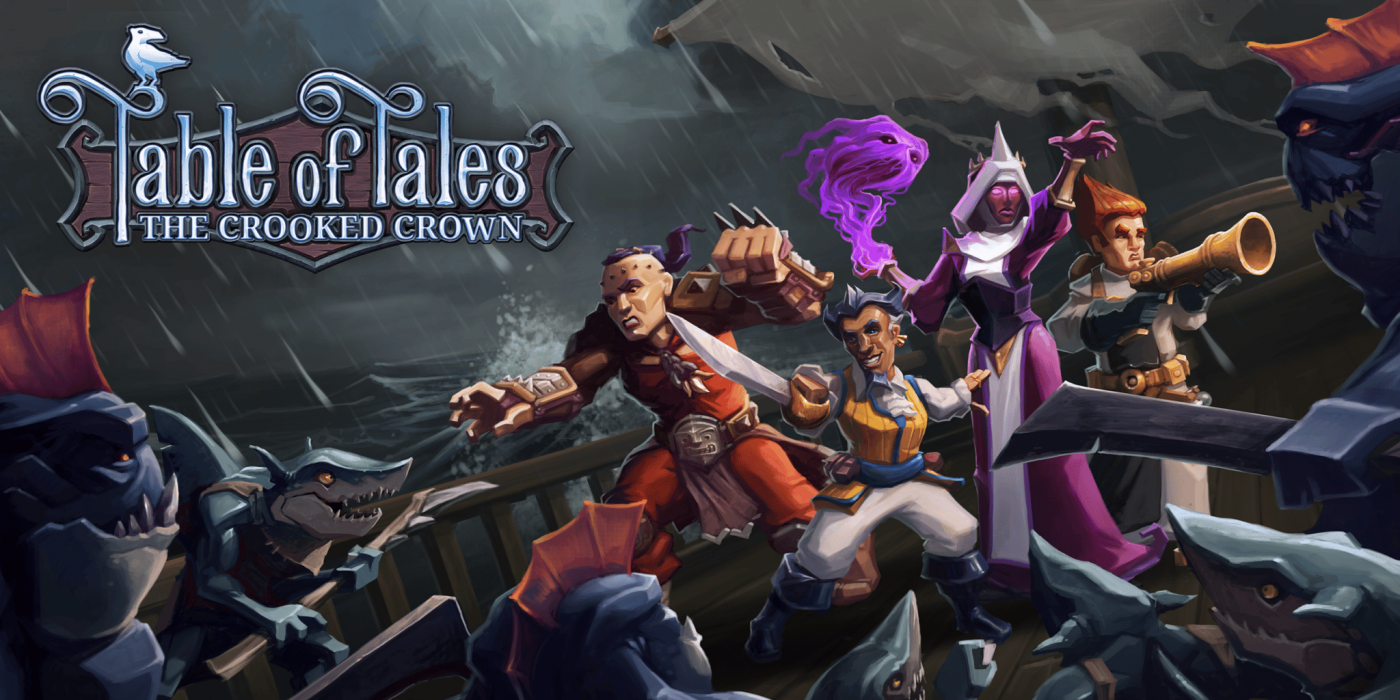 Table of Tales: The Crooked Crown brings an extremely unique tactics adventure from VR headsets to the Nintendo Switch.

Title: Table of Tales: The Crooked Crown
Release Date: July 14, 2022
Price: $19.99
Suggested Audience Age: Rated Everyone 10+ by the ESRB
Time to Play: 5.5 hours, according to How Long to Beat
Availability: Switch, PlayStation, Steam, Oculus
Recommended for fans of: Pirates, Tactical Combat, and Table Top RPGs
Geek to Geek Media was provided with a review copy of this title.

I have been up to my ears in tactical RPGs lately. Anticipating for the new game made me redownload Mario + Rabbids, I just reviewed The Hand of Merlin, and I’ve been playing XCOM 2 on my Patreon. I really love this genre, and I’ve always got my eyes out for new entries. It’s especially exciting when they bring something interesting to the table.

With Table of Tales: The Crooked Crown, the table itself is the interesting hook. You move figurines through an adventure on a magical table while a mechanical bird narrates the story. It’s a weird setup, but the story and tactical gameplay are both super compelling.

A Ship of Scoundrels

I’m not terribly far into Table of Tales yet, but the story hooked me right away. The game opens with some sort of parrot automaton (parramaton?) coming to life and whisking you away on a high seas adventure. Well, they don’t really whisk you away. The whole premise of the game is that you are standing still while watching the story unfold. The parrot narrates as a series of dioramas depicting oceans, cities, volcanoes, and whatever else appear on the table.

Since the parrot is guiding you through the story, their voice steps in for every character in the game. At first, this felt a little weird, but within about ten minutes I settled into it, and it felt like the bird was the Dungeon Master embodying a world of NPCs in a Dungeons & Dragons game.

Now it’s to the point that I routinely forget about the bird, and just settle in to watch the little scenes between battles play out. The figures have some light animation to them, but the storytelling works so well that they feel much more lifelike than they actually look.

The primary combat setup in Table of Tales feels very familiar to tactics fans. Each character in your party has a set number of action points they can use to move around the environment, attack enemies, or bolster their allies. Each character you control is unique, with their own abilities built around their character class. Like Rise of the Third Power, even their most basic attacks are given a little dash of flavor to make them feel distinct.

Going back to the Dungeons & Dragons connection, there are also opportunities to engage in skill checks both during and between battles. Early on, my ship was in distress and I had to choose which of my characters to send out to secure the mast, tie down the cannon, man the helm, and calm the captain. The character’s class determined their base chance of success, with a dice roll determining how well they actually did.

Having those moments of decision adds to the personification of the characters and provides mechanical rewards as well. Because I managed to secure the cannon in the dramatic scene, I then was able to use it against a raiding ship in the next battle.

I hadn’t realized that Table of Tales was built for VR when I started it up, but now that I know it seems incredibly obvious. The game features some obvious hallmarks of VR games. Everything unfolds from a fixed, first-person perspective with a character who looks right at you while they are talking and fiddly physical objects to play with.

For the most part, the Switch port handles the transition away from VR really well. The game does a good job of showing you your controls whenever you need them and selecting and moving characters around works fairly well. There have been a few times when it was a little unclear exactly which square I had highlighted on the board, but usually moving one square up or down and then back cleared that up.

On the perspective side of things, it can get a bit wonky. You can shift your perspective up and down or rotate the table 90 degrees left or right to get a view of the action. That ability keeps things moving well in battles so that you can always get a view that really lets you see what’s going on. Unfortunately, I found that actually moving around the board while the camera was at an angle didn’t work very well, so I mostly just found a good elevation and stayed there.

Finally, during the dramatic scenes between battles the game pulls you in and out of where you should be looking. That helps to make sure that you catch where the action of the scene is, but it often means that your parrot narrator (parrator?) is out of frame. This doesn’t really matter, but more than once I wished I could look over at him as he told me what was going on.

I’m only around halfway through the campaign of Table of Tales: The Crooked Crown so far, but I’m really enjoying my time with it. The storytelling and premise are really unique and interesting, and I’m surprised at how much a robotic parrot (robarrot?) can hook me in. The combat system works well without feeling terrible groundbreaking. Adding in the skill checks does give this a fresh feel, and an interesting sense of character that tactical games don’t always give.

I tend to love playing tactics games on Switch because they work well as multitasking games for me. However, between the surprisingly engaging story and the really interesting animation throughout, I’m looking forward to trying the Quest 2 version of this one, too. Keep an eye on this space for a follow-up on how that version feels compared to the Switch release!

In any case, this is an easy recommendation for fans of grid-based combat and pirate stories with a D&D feel!

Geek to Geek Rating: 4 out of 5 Smelly Scallywags