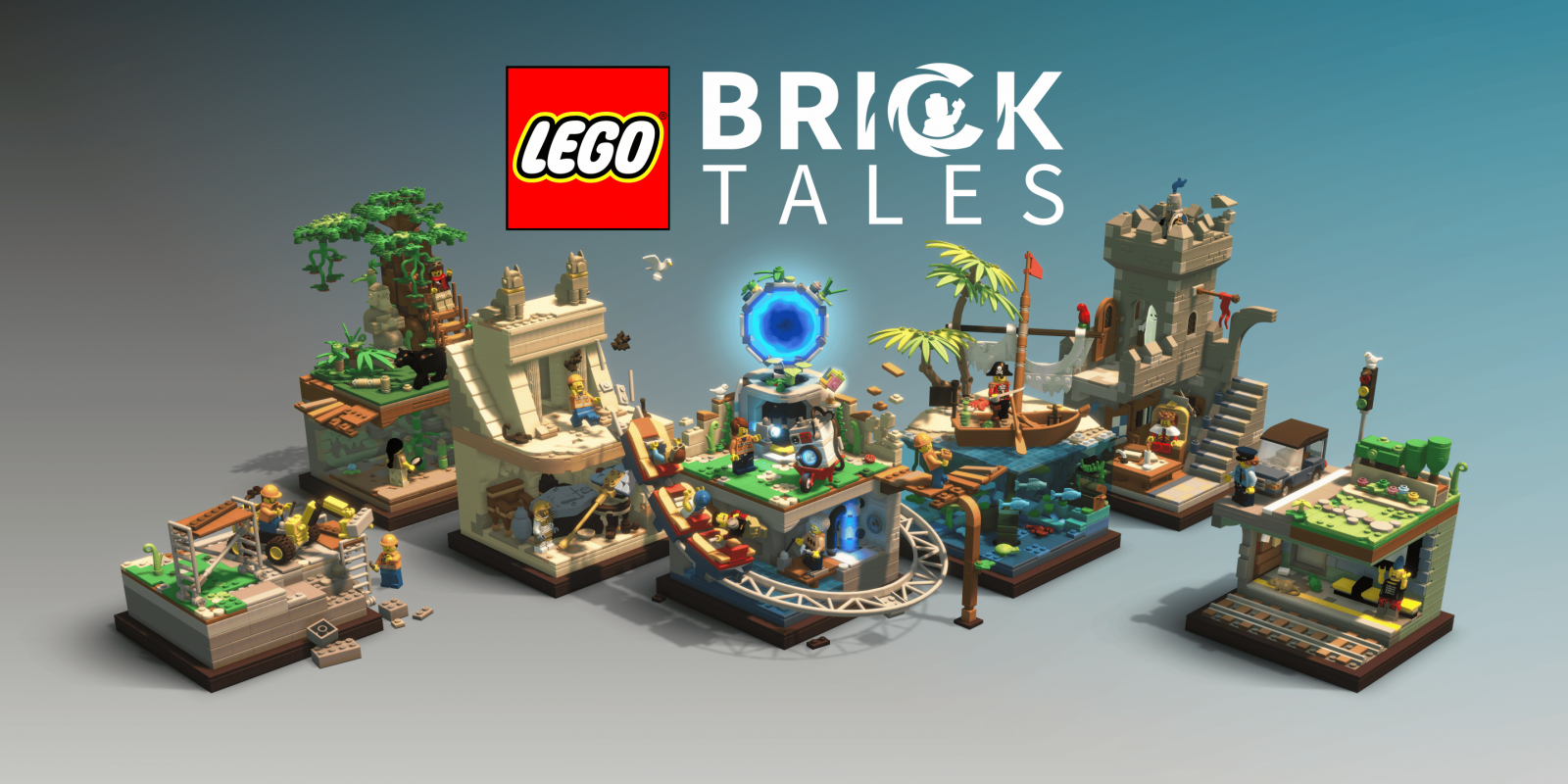 Geek to Geek Media was provided with a review copy of this title for Nintendo Switch.

I’m a massive fan of the non-movie-themed LEGO games like Worlds and Builder’s Journey.

Don’t get me wrong – I enjoy LEGO Star Wars as much as the next guy with an inner child. But, like Troytlepower, I have mixed feelings about them. That their voice acting lacks the charm of the first few games’ goofy pantomime. That if you’ve played one of them, you’ve played ’em all – and replayed them afterward for gated-off collectibles.

But mostly that they don’t ask you to build. You know, the #1 go-to verb that anybody associates with LEGO. Sure, there are sections where you gather bricks to solve road-blocks. But when construction it comes to construction time, they gloss over the entire process with a button-press.

But recently, we’ve been getting a few games that get closer to the intent of the toys. Where building, not beating-’em-up, is core to the experience.

And Bricktales may be my favorite of those yet.

Turn Over the Tub

To give you an idea of what I mean, one of the very first non-tutorial challenges of the game is as follows:

The game shows you a chasm. There is one instruction.

That’s it. That’s the whole puzzle.

You aren’t scored on how many or how few bricks you use to accomplish a task. There are no extra rewards for building quickly. The only ask is that your creation doesn’t collapse under its own weight.

I probably could’ve finished this “puzzle” in about two minutes by laying a set of planks end-to-end. Instead, I spent close to twenty minutes beautifying my creation. Ensuring it had crosswise supports running underneath. Installing a line of safety rails on each side. Coating the main path in a pleasant layer of smooth bricks.

That is to say: the exact same tinkering I’d do given a tub of mis-matched bricks.

The game knows exactly what it’s doing on that front, too. Just a bit further on, the game will ask you to construct a gyrocopter. Among the materials you’re given are a pair of potted plants. There is no gameplay incentive to use the plants.

Of course I built a cargo rack into my ‘copter for the greenery. What joy is there in creation without improvisation, after all?

While the creative segments themselves are obviously the meat-and-potatoes here, it’s still wrapped up in a sort of story campaign. Your eccentric grandpa has built a machine that conveniently teleports you from realm to realm. And each of them conveniently contains the “Crystals of Happiness” needed to power up your little robot companion.

It’s fine, but admittedly by-the-numbers. While I’m usually fine to take a break with reading a perfectly unremarkable video game story, I found myself skipping past Bricktales‘ cheeky dialogue. Some of it was that the script reads a little awkwardly, dropping punctuation here and there. But most of it was that I was just so enticed to get to the next building prompt.

The overworld-exploration isn’t really what you’re here for, anyway. That’s even reinforced by how each area doubles as a contextual showcase for your creations. That bridge I built? It’s a physical object in my instance of the jungle level now, a seamless part of a space completely, lovingly crafted of nothing but bricks. And, its “challenge” complete, I can wield an ever-expanding palette of basic bricks in “free build” mode to make it the very best bridge. I just might, at that, once I’ve paid a ghost minifigure to unlock some foliage.

Granted, exploring each of the game’s five levels – each evoking a classic “theme set” without directly quoting them – can be a chore. Your very-customizable little avatar jogs a clunky little jaunt from place to place, and the camera remains stubbornly in place unless you pause the game to enter a (admittedly gorgeous) “diorama mode”. While there is a charm to that stiff waddle, I found I couldn’t be bothered to circle back for most treasure chests, despite my collect-a-thon streak.

The building system, while it gobbled up hours of my time, isn’t without pain points. Both the touchscreen controls and control-stick movement could feel a titch clumsy and imprecise at times. And, on the occasion that you need to fix something later, there’s no way I’ve found of selecting multiple bricks at a time to move a whole structure over by one stud. Those, at least, I can chalk up to 3D free-form building making for a difficult engine to wrangle. They still annoy like paper cuts.

In fact, considering that the gam experiences framerate drops on Switch, it may seem a little odd that I’m still adoring this game.

But dangit, the game only really needs to do one thing well, and it’s doing that one thing well enough that I lose an hour at a time to it.

I’m all about expression through creation in my games. Pokémon embodies it through open team-building. I’ll happily spend too much time doting over any amount of character creation. I even occasionally miss the short-lived LEGO Universe for its rudimentary build-your-own housing.

And when you can dig into the core of LEGO Bricktales, that’s exactly what it revolves around. It’s ostensibly a puzzle game, sure. But it’s also an expression game. That really shines through in the celebratory low-stakes “rebuild the hub world” challenges after every level, offering a trove of parts for its most modest requirements.

It’s a series of playful excuses for you to dream up bite-sized projects with what parts you have in front of you, as simple or elaborate or haphazard as you please.

LEGO Bricktales is the whole digital equivalent of dumping a pail of mis-matched LEGO bricks on the floor and turning them into a house-boat for Johnny Thunder.

I’m so glad we’re finally there.

Geek to Geek Score: 4 Fern-copters out of 5